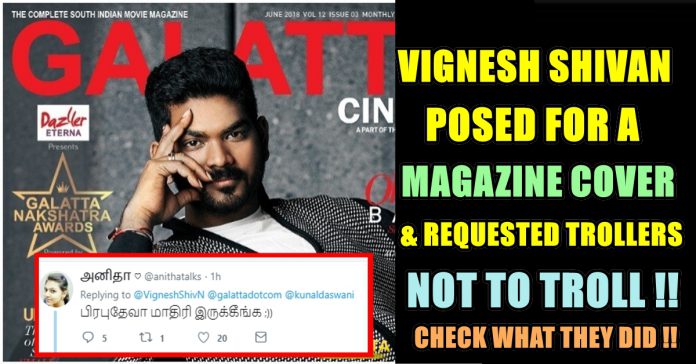 Vignesh Shivan, credited sometimes as Vignesh ShivN, is an Indian film director, actor and lyric writer who works in Tamil Cinema. He has been regularly associated in projects involving Simbu, Dhanush and Aniruth Ravichander as well as helming independent music videos. His second film, Naanum Rowdy Thaan (2015), went through several changes of cast and production studios, before finalising on Vijay Sethupathi and Nayanthara as lead actors and actor Dhanush as producer. The film, for which he drew inspiration from the lives of his parents, opened to highly positive reviews in October 2015. The music from Aniruth Ravichander was praised by audience.

Famous Tamil actress Nayanthara and Vignesh Shivan made made their first official appearance as a couple, at an awards show in Singapore. What’s more ‘ they even asked to be seated together and seemed to be at ease throughout the evening, sharing jokes, speaking into each other’s ears and laughing. And if all that PDA wasn’t enough, the hitherto reserved couple, who have refused to comment on their relationship status publicly, went one step ahead, and announced their love for each other, that too on stage! Vignesh, who went up to collect the Best Director’s Award for Nanum Rowdy Dhaan, thanked Nayan whom he couldn’t stop singing praises of. Calling her the ‘best human being’ he’s ever met, he thanked her for ‘coming to the script reading and falling in love’ With the script, or the man who read it out ‘ that he left to the listener’s imagination. But Nayan couldn’t stop blushing through it all, and was seen giggling like a teenager in love. Recently Vignesh Shivan tweeted by wishing Nayanthara for her Vijay Awards. Now In an exclusive interview with Galatta, he opened about his professional and personal life. He also posed for the cover picture of the magazine which he posted in his twitter account as well. He posted it with the caption ” Lovable Trollers please leave it like you have not seen it”

Thank you @galattadotcom @kunaldaswani , Chaitanya & team 🙂
Had fun doing this 🙂

To which mamy comments kept pouring. Here’s some of it : Previous articleBREAKING : Two Youngsters From Erode Proved Sea Water Can Be Used Instead Petrol !! : Watch Video !!
Next article“You Have Big Respect In The Society , Please Remove The Coat” Bala Says To Gopinath’s Face !!