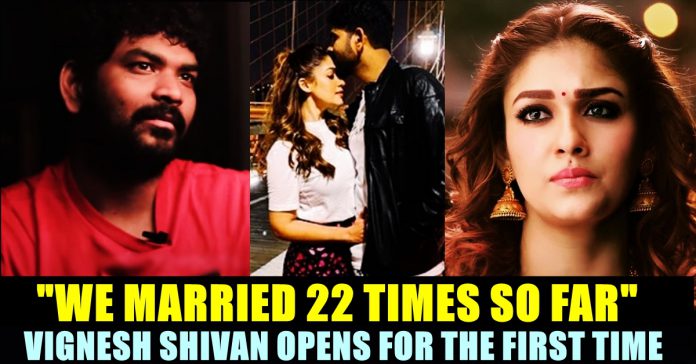 Filmmaker Vignesh Shivan, boyfriend of actress Nayanthara opened on his marriage for the first time in media. He sarcastically said that his marriage took place 22 times so far, pointing out how media is creating rumours every now and them about his marriage with Nayanthara. However, the filmmaker said that they both will get married after achieving their respective goals.

Vignesh Shivan debuted to Tamil film industry through Simbu’s “Podaa Podee”. The filmmaker developed a romantic relationship with Nayanthara during the making of his second film “Naanum Rowdy Dhaan”. After the success of Naanum Rowdy Dhaan, Vignesh Shivan directed actor Suriya in “Thaana Serntha Kootam”. He also started a production house with Nayanthara and named it as “Rowdy Pictures” with which he is producing “Nettri Kann” by having Nayanthara in the lead role.

Talking about his marriage with Nayanthara, he said “In Internet alone, my marriage have took place for 22 times. Every 3 months, they (media) will conduct our marriage.” laughed Vignesh Shivan. “We have some goals and ambitions. We are planning to look after our personal life only after finishing those things. Our focus is to complete “Kaathu Vaakula Kaadhal” now.” he said. “Let us see when this love gets bored. Now we are doing our respective jobs. When the time comes, we will get married” he said.

While talking about the latest video he posted with Nayanthara when a rumour on them getting infected with COVID 19 surfaced, Vignesh said that he approached Nayanthara to respond to the rumour in a funny way. “She said ok and we did the video” he said.

And .., that’s how we see the news about us, the corona and the imagination of all the press & social media sweethearts 🥳 Anyways! To our well-wishers 😇 We are happy 😊 healthy and God has blessed us with enough strength & happiness to see all you jokers and your jokes ! 😇😇😇 God bless 😇😇😇🧚‍♂️🧚‍♂️🧚‍♂️🧚‍♂️

Vignesh Shivan talked about many other things in the interaction including about his upcoming film “Kaathu Vaakula Rendu Kaadhal”. He said that the film will be a humorous feel good romantic film. and also shared his experience on narrating the script with Samantha who is going to do one of the leads in the film.

The filmmaker also shared how he misses travelling amidst COVID 19 lockdown. “Last year I have been in foreign countries for 200+ days. I always loved to explore different things by going to many countries. Live shows are something I love to be a part of as a viewer” Vignesh Shivan said.

Previous articleHansika Started Concentrating In Business Due To Lack Of Film Offers ?? Check Her Reply
Next articleAmritha Aiyer Wants Her Followers To Comment On Her “Teeth” !! Check Their Response

Actress Anu Immanuel who became familiar among Tamil audience after pairing opposite to Sivakarthikeyan in "Namma Veetu Pillai", debuted in Tamil film industry through...