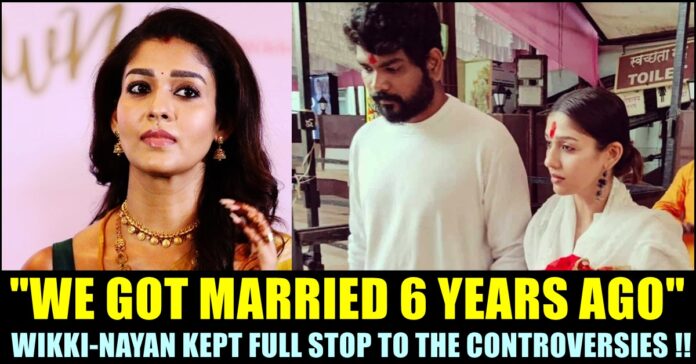 Celebrity couple Vignesh Shivan and Nayanthara kept a full stop to the ongoing controversies that were doing rounds surrounding them. According to News 18, the couple submitted the required documents to the crew that was formed to investigate about how they gave birth to twin babies post just 4 months of their marriage event.

Nayan & Me have become Amma & Appa❤️
We are blessed with
twin baby Boys❤️❤️
All Our prayers,our ancestors’ blessings combined wit all the good manifestations made, have come 2gethr in the form Of 2 blessed babies for us❤️😇
Need all ur blessings for our
Uyir😇❤️& Ulagam😇❤️ pic.twitter.com/G3NWvVTwo9

Through the documents, the couple informed the government that they registered their marriage 6 years ago and applied to go through surrogacy process during December months of 2021 itself. The ongoing rules and regulations of Surrogacy act came into effect only during June month of this year. The couple reportedly claimed that the ongoing rules couldn’t control them as they applied for surrogacy way before.

Ever since Vignesh Shivan made the announcement about giving birth to twin babies 4 months after his marriage, many questions regarding whether the couple followed the laws in order to give birth to the babies through surrogacy are being made in internet platforms by the users of it.

Media portals reported that Indian Constitution poses strict rules such as the couple should be married for minimum 5 long years, Woman who gives birth must be married and should have given birth to a baby in the past, male or female proving their inability to fertile a child etc in order to go through a surrogacy. However, an advocate named Vignesh Muthukumar, in one of his videos, said that there are probabilities for the couple to go free as the government announced grace time while enforcing the law on 25th of December, 2021.

In his video, Muthukumar, while listing the norms to give birth to a child through surrogacy, said that the law wants the woman who gives birth for the child on behalf of a couple must be close relative to them. “If the couple breached any of the norm, they will be subjected to 3 years of jail imprisonment and Rs. 5 lakh of fine amount under section 41” said Vignesh Muthukumar.

Further, he said that the couple could go free without following the rules as the act was enforced only during 25th of December, 2021 and the government announced grace period as well. “If Nayanthara and Vignesh Shivan made use of the grace period, they needn’t follow the protocols” the advocate added.

Earlier, Tamil Nadu Health Minister Ma. Subramanian had said that the government would seek an explanation from the celebrity couple Vignesh Shivan and Nayanthara who welcomed to their twin babies on Sunday. They who got married on 9th of June, welcomed their twin babies through surrogacy on 9th of October.

Now, a report emerged saying that the informed the government about their marriage bring registered 6 long years ago and they applied for the surrogacy process during December months itself. Watch the video below :

On the work front, Vignesh Shivan will be directing actor Ajith kumar post his “Thunivu” whereas Nayanthara who was last seen in Chiru’s “Godfather” is expected to be seen in films such “Jawan” of Shah Rukh Khan, “Gold”, “Connect” etc.

Since the demise of Chithra, speculations on her replacement for "Pandiyan Stores" serial is doing rounds in social media. Initially, a report surfaced saying...

For requesting people to quarantine themselves at this situation, actress Manjima Mohan who is known for appearing in films like "Achcham Enbathu madamayada", "Oru...