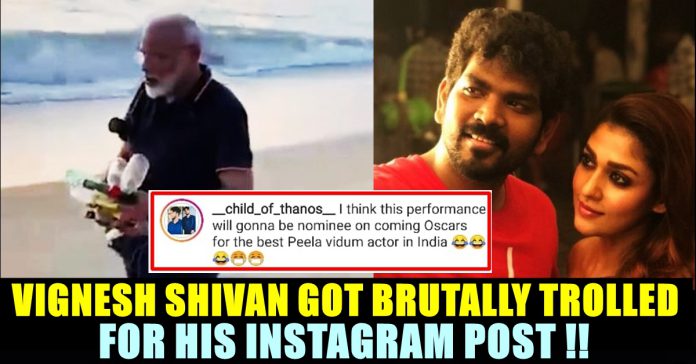 Prime Minister Narendra Modi on Saturday collected plastic bottles, plates and other garbage thrown on the beach outside the Taj Fisherman’s Cove Resort and Spa near Mamallapuram where he is staying.

Clad in a black kurta-pajama, Mr. Modi was seen with a large plastic bag in hand during his early morning walk as he picked out plastic litter, water bottles strewn on the sands.

Walking bare foot along the sea shore, he was seen picking up slippers from the sands normally given to guests staying at the five-star property. In a video tweeted by PM Modi, he is seen picking up litter at a beach near Taj Fisherman’s Cove Resort and Spa where he is staying for the informal summit. “Plogging at a beach in Mamallapuram this morning. It lasted for over 30 minutes. Also handed over my ‘collection’ to Jeyaraj, who is a part of the hotel staff,” he tweeted.

Plogging at a beach in Mamallapuram this morning. It lasted for over 30 minutes.

Also handed over my ‘collection’ to Jeyaraj, who is a part of the hotel staff.

Let us ensure our public places are clean and tidy!

Let us also ensure we remain fit and healthy. pic.twitter.com/qBHLTxtM9y

This tweet was appreciated across the country as he inspired the millions of people in India. Popular Tamil director Vignesh Shivan who is known for directing “Naanum Rowdy Thaan” starring Nayanthara, shared this video and wrote “Yes … he is India’s prime minister .. ! modi #modiTNvisit #tamilnadu #pmoindia #swachbharat #settinganexample #goodgesture #kudos” in his official Instagram account.

However, this post doesn’t go well with his followers it seems. Most of them including dance master Sathish who is a dear friend of Vignesh Shivan, trolled this post and said that there is no necessity to capture it.

Plogging, a recreational activity which originated in Sweden, combines jogging with picking up litter.

In another tweet, PM Modi shared a few pictures where he is seen walking and exercising along the coast. “Refreshing walk and exercises in Mamallapuram, along the scenic coast,” he wrote.

Refreshing walk and exercises in Mamallapuram, along the scenic coast. pic.twitter.com/UjUq8FbVAv

Vignesh Shivan, on his work front is waiting to do his next film with Sivakarthikeyan which is announced to be produced by Lyca Productions. What do you think on this post of Vignesh ? Comment your views !!

Ever Tried Baahubali Sandwich, Syringe Pani Puri, Paan Milkshake? : This Cafe In Kilpauk Serves Them All!!