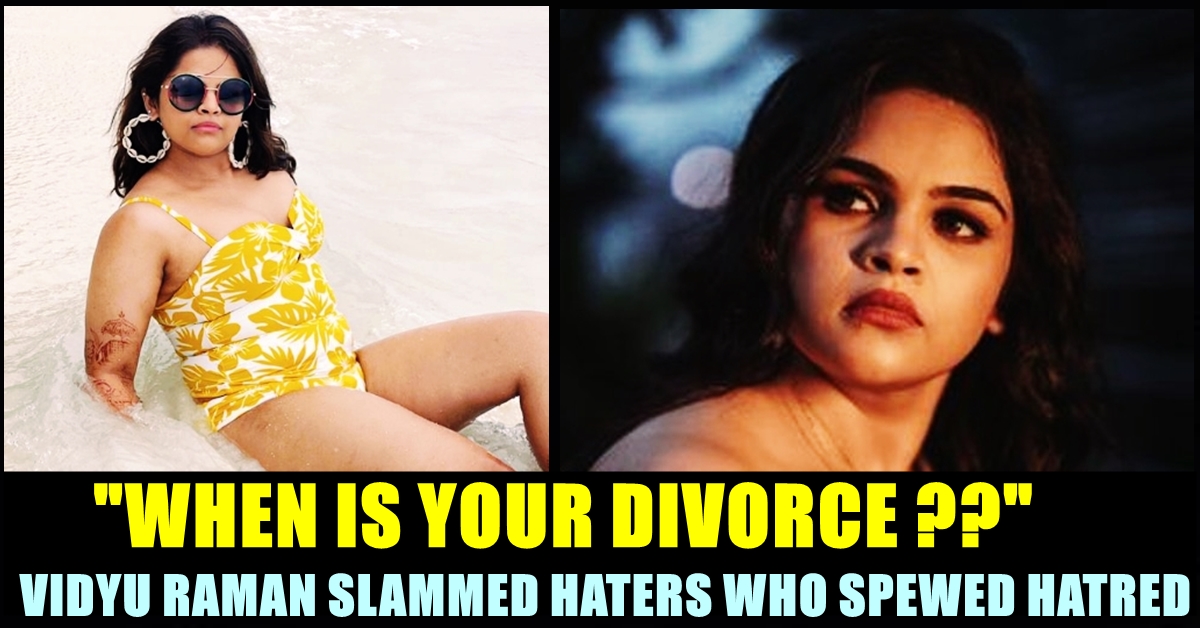 Popular actress Vidyu Raman who is known for the roles she played in films such as “Veeram”, “Neethane En Vasantham” etc, slammed her followers who spewed hatred at her recent Instagram post in which she flaunted her body transformation by wearing a swimsuit. Many of her toxic followers seemingly asked the recently married actress when will be her divorce, after seeing that particular post. Reacting to such posts, Vidyu Raman said.

The actress got married to Sanjay Watwani, a fitness expert on 9th of September, 2021. She made the news public through one of her Instagram posts which was posted on 17th of the same month. Ever since her marriage took place, Vidyu Raman is pretty much active in Instagram, uploading pictures of the special ceremony of her life. Check out some of her marriage posts below :

With 5 lakh plus followers for her official Instagram account, Vidyu Raman is also sharing the pictures of her major body transformation. She who visited Maldives recently, uploaded a picture of herself wearing swimsuit with a caption saying “I need a 6 month vacation twice a year. 🌴💛”

Along with a number of positive comments she received, Vidyu also got negative comments it seems. Most of them seemingly asked when the actress would get divorce from her husband for uploading such picture in her Instagram timeline. Reacting to such comments, Vidyu, initially added a reaction of her, writing “My reaction when I read comments about how a woman’s clothes defines the longevity of her marriage. #Get A Life” as her caption.

In her next story, the actress said “BEEN GETTING MESSAGES LIKE WHEN IS MY DIVORCE?” ETC. JUST
BECAUSE I’M WEARINGA SWIMSUIT? WOW. GET OUT OF 1920 AUNTIES & UNCLES. cOME TO 2021
WHAT IS PROBLEMATIC IS NOT THE NEGATIVE COMMENTS. BUT THE WAY WE ARE THINKING AS A SOCIETY IF A WOMAN’S CLOTHING IS REASON FOR HER DIVORCE, THEN SHOULDN’T EVERYONE “PROPERLY DRESSED” BE IN HAPPY MARRIAGES???” in her story.

“I AM EXTREMELY FORTUNATE TO HAVE A SECURE HUSBAND LIKE LOWCARB.INDIA WHO SHARES DIFFERENT MORAL BELIEFS WITH ME. HE TOLD ME TO IGNORE& NOT TO ADDRESS THIS. BUT I SIMPLY CANNOT BRUSH THIS OFF. TO THE HATERS ICANNOT CHANGE YOUR TOXIC. NARROW MIND OR EXTREMLY REGRESSIVE OUTLOOK TO LIFE. I JUST HOPE THE WOMEN IN YOUR LIFE STAND UP FOR THE SEXIST OPPRESSIVE & DOWNRIGHT INSULTING WAY IN WHICH YOU LOOK AT A WOMAN. HER INDIVIDUALITY. LIVEANDLETLIVE” She further added.

Check out the screen shot of her story :

Old Post Of Samantha About Siddharth Getting Spammed After Her Divorce !!
Celebrities Got Emotional Hearing SPB’s Voice For One Last Time !!
Advertisement