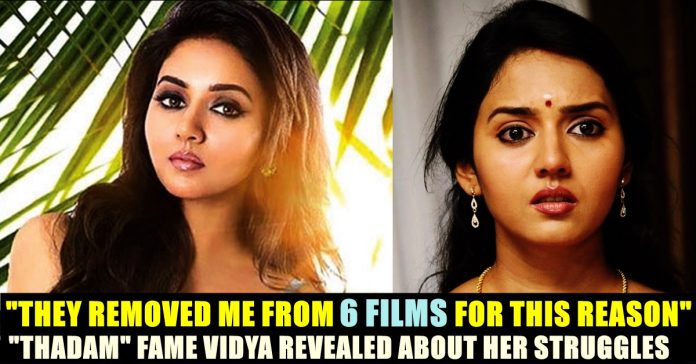 It is not a cakewalk for women who are aspiring to pursue a career in Tamil film industry as heroine it seems. It is widely believed that not only passion and persistence but something more than that is expected from young aspirants by the majority number of producers, directors and high profile actors in Kollywood. We have seen heroines coming up revealing about the trauma they went through while trying for movie opportunities. Recently, actress Vani Bhojan broke the stereotypes and played one of a lead in a super hit film named as “Oh My Kadavule” by being a small screen actress. However, she herself revealed that she received indirect approaches from big shots of Kollywood.

“I faced one to two phone calls through manager but I never gave importance to such calls. I didn’t receive any direct contacts with any film personalities. They only contacted my manager directly. I believe it will change soon. Please actors” she said in a recent interaction. Read : Vani Bhojan Revealed How She Got Approached For Casting Couch !!. Now, actress Vidya Pradeep who also hailed from small screen, got her face recognised among the Tamil film audience through 2019 blockbuster “Thadam”. Her recent social media post depicted the struggles she faced before getting the opportunity to act in the Magizh Thirumeni directorial.

Vidya, a research scientist by profession, appeared in a Sun TV serial named as “Nayagi” initially. After that she went on to act in small roles in films. It was Magizh Thirumeni’s “Thadam” which gave her the break she needed the most. Vidya, through her recent instagram post said that she walked or replaced from six projects before “Thadam” for “very unprofessional reasons”. The actress who thought of giving up her movie career after facing a number of heartbreaking incidents, decided to focus on her studies. That is the time she received a call from casting director Sruthi who asked her to meet director Magizh Thirumeni for the role “Malar vizhi” in Thadam. Vidya who was hesitant to attend the audition initially due to the experiences she had with other directors, says that she went to his office without any expectations.

Magizh Thirumeni who provided genuine films to Tamil film industry such as Thadayara Thaaka, Meeghaman appreciated Vidya Pradeep’s eyes and dubbed it as very powerful. The actress was selected for the role after having a brief conversation with Magizh about the character. Vidya goes on to share about the experience she had while appearing for the first day of shoot with the police uniform. She lauded Magizh Thirumeni for the way he behaved in sets. “Sir used to encourage me after every good shot saying that “you are magic”. Sir knows how to bring the best out of an actor with affection and respect….” Vidya’s post read.

Vidya further says that “Thadam” gave her the faith to continue her career in film industry. She says that the film made her believe that talent alone is enough to survive in the film industry. Viday also said that self made actors like her who have no Godfathers in film industry should be ready to face extreme hardships. “You could be avoided, ignored or not even considered as an artist certain times because you don’t follow the “norms”.  But that’s okay you can still survive if you believe in yourself and willing to work hard. At the end of the day you can be super proud of your smallest achievements because you earned that all by yourself because nothing was given free or in return.” the actress wrote.

Vidya went on to laud actor Arun Vijay for being a kind and hardworking co-star. She said that he made her feel so comfortable around him. She thanked the producer, camera man, Assistant directors and the entire crew of the film who helped her to complete the project successfully. On the work front Vidya appeared in Ponmagal Vanthaal in an important role and is expected to appear in films like “Thalaivi” “Oththaiku Oththa”, “Asurakulam” and in many more.

Director Karthick Naren's unreleased film "Naragasooran" which was highly anticipated to be released as his second film, is yet to see the light. However,...