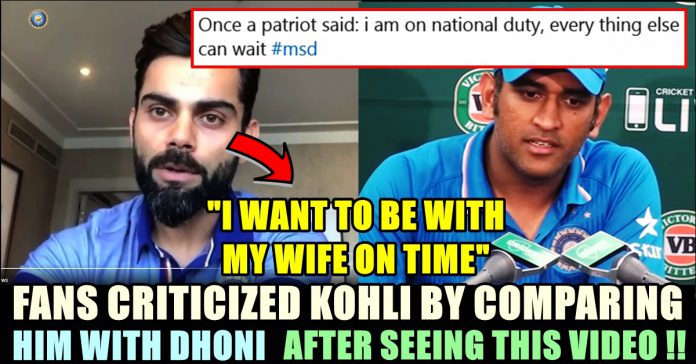 Video of Kohli explaining why he is going to leave the team after first test match against Australia getting severely criticized by the fans of Indian cricket team. Most of them compared Kohli’s reasoning with a press meet speech gave by Dhoni during 2015 world cup and criticized the 32 year old cricketer.

In the video, Kohli said that he will be leaving to India after the first test as he is expecting his first child. “I will be flying by after the first test. And that was only based on the fact that we have quarantine period both ways. I had explained the same to the selectors during our selection meeting.” says Kohli in the video.

“I wanted to be back home in time to be with my wife for the birth of our first child. It is a very very special and very very beautiful moment in our lives and something that I truly want to experience. That was the reason behind my decision which was communicated to the selectors during the selection meeting” he added.

I wanted to be back home in time to be with my wife for the birth of our first child: @imVkohli #TeamIndia pic.twitter.com/oyYHMA6Vtt

On seeing this video of Kohli, many fans criticized him for leaving the team in midway when it needed him the most. Majority of them pointed out the press meet speech of former Indian cricketer Dhoni and said that Kohli could never become a better captain like him.

“During 2015 odi world cup, in the same situation @msdhoni told that he is on a National duty and other things can wait. That’s the difference between Ms dhoni and others” said a social media user whereas another one said “So basically you are saying Family first Nation next.Good thanks for making it clear.”

During 2015 odi world cup, in the same situation @msdhoni told that he is on a National duty and other things can wait. That's the difference between Ms dhoni and others@SaakshiSRawat @ChennaiIPL

Virat sir you are on national duty you can't go off for personal reasons you are the strength of this batting order if you are not their then Aussies will become tough to defend We know you are in pressure from miss Sharma but think about it.

So basically you are saying
Family first Nation next.
Good thanks for making it clear.

Hearing this make me understand how great @msdhoni is who choose country over first child and wife.
No matter if @imVkohli scores 200 centuries he will not get the same respect and love the way @msdhoni recieves.

You should do your national duty first…

@imVkohli Sir,I am a big fan of you & respect u a lot.But when a man is in national duty then nothing should be more important.Because nation comes first.If indian armed force personals also follow the same then just give a thought what will happen then.
Best wishes for baby,sir

You should have played whole series and gifted the trophy and a place in WTC final to your baby!

Once a patriot said: i am on national duty, every thing else can wait #msd

During 2015 world cup, Dhoni was asked by a reporter whether he missed being in India at the time of Ziva’s birth. The former captain won over the media and virtually everyone with his answer. “Not really. As of now, I am on national duties so I think everything else can wait. he said at that time.

Indian wicket keeper batsman Rishabh Pant who has been captaining Delhi Capitals side in Indian Premiere League, got cheated Rs. 1.63 crore by Haryana...

Seemaraja Cancelled In Rohini Silver Screen !! Fans Trolling For The Banner They Kept A Month Long !!

The growth of Sivakarthikeyan from a witty stand-up comedian to a star is stunning and equally intriguing. Siva, who shot to fame due to...