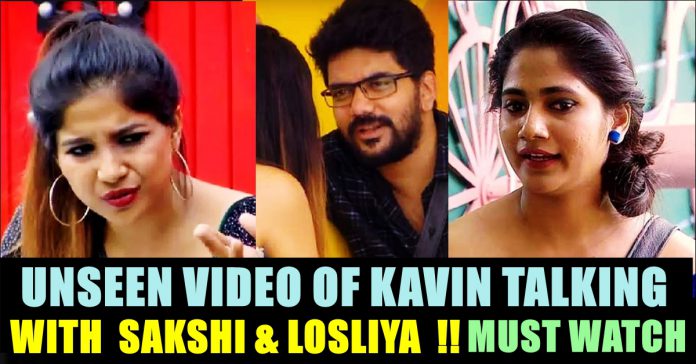 With 3 promos per day and a show time of 1 hour, Bigg Boss is keeping the netizens busy all the day. The behaviour of the contestants who participated in the show influencing people to talk about it in social media. As said Kamal Haasan said in the initial promo video, people started to see themselves through the show.

Starting from Abhirami’s verbal spat with Madhumitha to Vanitha Vijayakumar’s elimination, the show providing its own essence unlike other reality shows. Despite the rumour of being a scripted show, Bigg Boss manages to entertain the audience in daily basis.

Among all the contestants, Kavin who is one of the very well known contestants of the BIGG BOSS show for his appearance in serials before entering the house, has became the topic in social media platforms for not so good reasons. In the very first episode, Kavin declared that all the four young girls in the house are his lovers. Though it looked funny initially, viewers started getting irritated on seeing his further activities. The way he tries to be a good person to everyone inside the house gained him good name neither among the housemates nor the audience.

Apart from having a healthy relationship with female contestants like Sakshi, Losliya, Sherin and Abhirami, Kavin involved in arguments with Madhumitha and Meera on certain occasions. By going through his recent activities, Kavin is unstable inside the house, especially when he interacts with Sakshi and Losliya. In these videos, Kavin accepts that he shared things with Sakshi which were beyond friendship but denies to term it as a special relationship. He does something similar with Losliya as well.

Sakshi one of the housemates, accusing Kavin for being a hypocrite. She alleges that Kavin instigated unnecessary feelings and now taking side with Losliya who has huge support from audience. In these videos, Kavin accepts that he shared things with Sakshi which were beyond friendship but denies to term it as a special relationship. He does something similar with Losliya as well. Check out the videos below :

One of the most loved TV artist is now turning into a most hated Bigg Boss contestant. Few even defaming his core character with abusive trolls for his behaviour inside the house. Two season successfully completed in BIGG BOSS Tamil and the third season has 16 contestants including 8 female and 8 male contestants among which one of the female contestant evicted lately.

The episodes of Kamal Haasan interacting with the contestants would be telecasted on Saturday and Sunday. The “Virumandi” actor would analyse the behaviour of all the contestants and would provide justice by showing a “Short Film”.

What do you think on these activities of Kavin ?? Comment your views below !!

Previous articleShikhar Dhawan Picked Up Bat For The First Time After Injury !! Got Trolled For This Reason !!
Next articleRadhika Apte’s Sensational Statement On Her Leaked Intimate Video !! UNEXPECTED !!

The central government announced that it is going to extend the lockdown period on Friday. The lockdown is getting extended for third consecutive time...

Tamil nadu police arrested a culprit who cheated public by selling a normal eye glass, claiming that it would help one to see people...