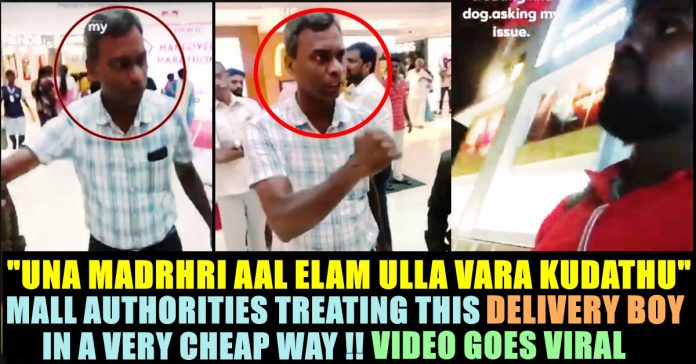 According to sources Swiggy and Zomato delivery boys now earn between 25,000 and 50,000 per month, depending on factors such as the number of deliveries completed and the distance they cover.

If you live alone or just can’t cook edible food, then there is only one solution that most people who deal with this resort to – ordering food online. Earlier a video of Zomato delivery guy eating food of a customer went viral for which he got sacked. Now this time another video of a Zomato delivery guy goes viral for completely a different reason. As we can see many youths who are studying and working are involved in this food delivery job as a part time, this youth who shot the video also seemed to be a graduate.

The video shows a youth who is in his mid 20’s having an verbal argument with the authorities of a mall for not letting him enter into the mall. Though the guy clearly explains that he is entering the mall only to receive food from a restaurant to deliver, he is seen bullied by an authority which is evident in the video.

“If you remove your uniform T-shirt you will sure be respected by us” says a man in the video to the youth to make him leave. The video starts with the guy asking “So no one here in the mall carrying a bag ??”  to which the authority answers as “Yes” and he also asks “No bike parking provided for the who visits this mall ??” to which the authority “Only for guys like you, the parking is not available”.

While he is talking with one authority another man intervenes and forcing the delivery guy to leave the mall immediately who also intimidated him not to talk loud inside the mall. “We don’t care whatever you capture” says one of the authority which is clearly audible.

“I am a graduated and I want to know why am I not allowed to get inside ??” asks the guy after getting bullied by the men of Providence Mall, Podicherry. This leads to a severe argument and the video disconnects abruptly as we can see the guy being man handled.

This incident created huge outrage in social media where many expressed their disappointment towards the behaviour of the mall authorities.

Atrocious Attitude by the officials of Providence Mall. Strongly Condemning the act.. There is a way to treat people. Prejudicing and discriminating with his Uniform is humiliating. The Mall personnel must repent & streamline the procedure for food delivering.#Puducherry pic.twitter.com/zplIRgeLRm

The Pondicherry providence mall management threw out a Zomato delivery executive saying that “ur kind are not allowed”. This is discrimination based on professions. Please do rate them with 1 ⭐ on google maps. They should apologize unconditionallyhttps://t.co/aqU2A5OxOX https://t.co/4vnUWcSe8k

@ZomatoIN hey guys, would like to point out this issue at Providence Mall Pondicherry, Zomato delivery associate was ill treated and man handled,pls intervenehttps://t.co/YNm53LgBNi

What do you think on this issue ?? Comment your views below !!

Previous articleMuch Awaited Review Of “Blue Sattai” For “Super Deluxe” Movie !! He Just Thrashed It !!
Next articleDirector Vijay & Sai Pallavi To Get Married ?? This BIGG BOSS Celebrity Condemns The Rumour !!

Oviyaa who gained Army pages for herself through her Bigg Boss stint, stunned her fans and followers through her recent quarantine photoshoot in which...

Celebrities Raised Voice Seeking Justice For The Demise Of Lavanya !!