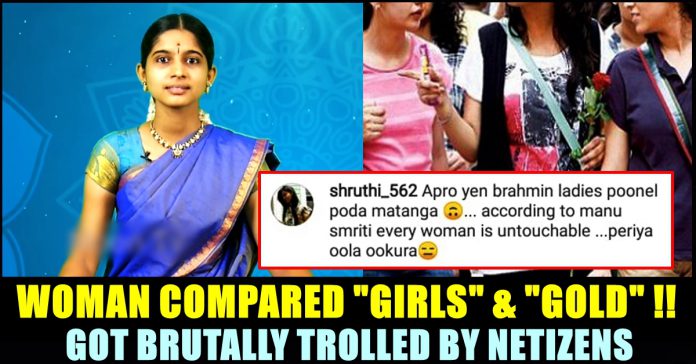 Video of a spiritual Tamil woman comparing girls with Gold and preaching people to protect them with everything they have, has became a subject to severe online trolls and criticisms. Me Too activist Chinmayi uploaded a story condemning the video in her official Instagram account. Users of social media platforms believe that the woman, through her speech, restricts the growth of woman in the society. She cites that women are not equal to men but more valuable than men and wants people to protect women in their homes respectively.

In the video, the woman says that females aren’t equal to males, according to “Sanathana Dharma” but more valuable then them. She further justifies restricting women in their respective homes by comparing them with “Gold”. “If you keep a Gold piece on streets, someone would definitely steal it, right ?” she says and goes one to explain why women shouldn’t go out.

“Women are the ones who saves the culture and family. Women are “Mahalakshmi” for every home. Do anyone expose a “Mahalakshmi” who saves an entire family ? We should treasure that “Mahalakshmi”, shouldn’t we ?” she asked the viewers of her video.

The original video was uploaded by a youtube channel named Moon TV on 26th of January 2020 with a title “Meenakshi Sundareswarar Thirukalyanam, தை வெள்ளி சிறப்புக்கள்”. The video lasts for 31 minute long and she talks about similar ideologies throughout the video. Here’s the full video :

Here’s some of the other reactions :

Previous articleRhea Chakraborty’s Post On The First Death Anniversary Of Sushanth Garnered Internet’s Attention !!
Next articleSuper Singer Divya Exposed A Pervert Who Sent D*ck Video To Her In Instagram !!

On Thursday, Raaj Kamal films international came up with a post in their social media handles updating about their schedule for the promotion of...