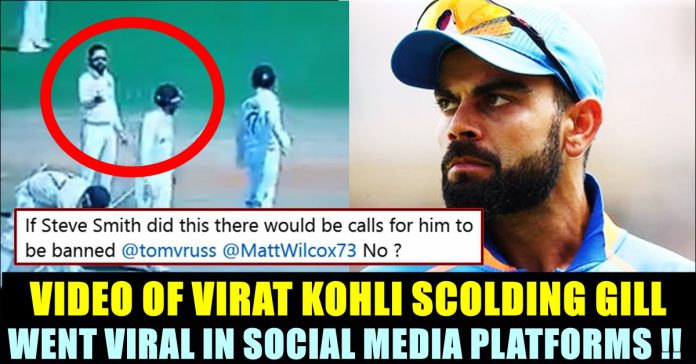 A video of the incident that took place during the second day of second test between England and India is going viral in social media platforms. The video shows Indian skipper Virat Kohli who was fielding at the short leg, throwing his helmet towards Rishabh Pant to catch it but the helmet was dropped on the pitch as Shubman Gill crossed the path of Pant. Unamused by the intervene of Gill, Kohli pointed his hand towards him and expressed his anger.

The second test that took place at Chepauk stadium of Chennai was comfortably won by team India with a complete day to spare in the entire test match. Talking about the victory, Virat Kohli lauded Chennai crowd for their intelligence. “The crowds make a big difference, this game was an example of the grit and determination this side shows and the crowd is a big part of that. Chennai crowd are very intelligent, they understand their cricket really well. In a 15-20 minute period where the bowler needs the support of the crowd, it is my responsibility to involve everyone and bring in the crowd.” Kohli said in the post match presentation.

“If I am running in to bowl in this heat, I need people to motivate me. It is a perfect game for us. The conditions were challenging for both sides, but we showed more application with the bat. We didn’t panic out there looking at the turn and bounce, we showed grit, got into the game and scored 600 runs in the game. We know our bowlers would do the job for us if we put up these runs. The toss wouldn’t have mattered much in this game to be honest, because if you looked at our second innings, we got 300 as well. It wasn’t unfair if the toss went either way. Both teams should be in the game from the first session onwards, whether it is on spinning to seaming tracks, and that exactly was the case in this game.” he added.

As we all know, Kohli is known for his animated expressions on the filed. His impulsive gestures often grabbed the attention of the camera and the cricketer is someone who doesn’t know how to hide his emotions. He who motivated the crowd to cheer more, caught on camera while scolding Shubman Gill.

The incident happened when England spinner Jack leech was batting on Sunday. At the end of one of Ravichandran Ashwin’s over, to change his field position, Captain Virat Kohli who was fielding at short leg, removed his helmet and threw it at Rishab Pant to catch it. When the keeper was blocked by Shubman Gill, the helmet fell on the pitch and left Pant starring at his captain.

Though Gill didn’t intend to block the keeper, Kohli blamed it on him and pointed it hand towards him in anger. The video is doing rounds in social media platforms with fans expressing their displeasure over the Indian captain’s gesture.

If Steve Smith did this there would be calls for him to be banned @tomvruss @MattWilcox73 No ? pic.twitter.com/gLFBUCM9vV

“Fielder damaging a pitch” is an offence according to the playing conditions of ICC World test championship. “It is unfair to cause deliberate or avoidable damage to the pitch. A fielder will be deemed to be causing avoidable damage if either umpire considers that his presence on the pitch is without reasonable cause.” However, the Indian captain didn’t intend to damage the match which is evident through the video which is doing rounds in social media platforms.

Previous article“It Is Because Of Murali Vijay” – Ashwin On Kohli’s “Vera Level, Vera Level” !! MUST WATCH
Next articleSiddharth Slammed Indian Government For The Arrest Of Disha Ravi !!

Girl Wearing Mask In JNU Attack Is A Student ??

Madhavan's hilarious tweet after testing positive for COVID 19 virus made his followers to do both laugh and pray for his speedy recovery....