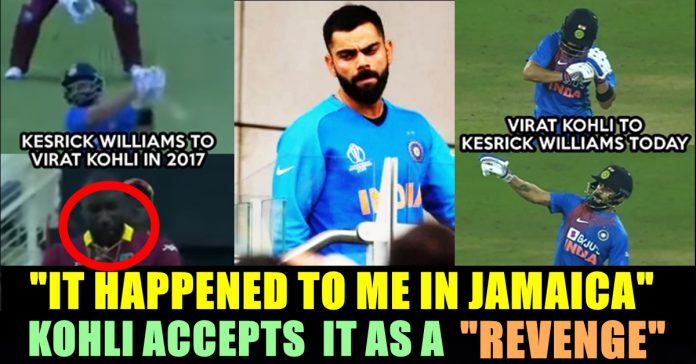 Video Of Virat Kohli Accepting It As A “Revenge” Goes Viral !! WATCH !!

Virat Kohli led from the front and scored 94 not out to help India beat the West Indies by six wickets in the first T20 International in Hyderabad on Friday. Even though Virat Kohli missed out on his maiden T20I hundred, he garnered praise from both fans and cricket experts for showing tremendous grit in a tough chase.

The cricketer who is known for his aggressive approach in field, yesterday made a gesture of “Notebook Celebration” after hitting Kesrick William for a six. He indeed imitated the bowler who always did that sort of celebration after taking important wickets on certain occasions. On the 16th over which was bowled by Kesrick, India scored 23 runs which helped the team to chase the big target effortlessly by sparing 8 balls.

You do not mess with the Skip! 🔥🔥 #TeamIndia #INDvWI @paytm

After watching this video, many fans of Indian cricket team went gaga and few recognised it as an revenge by the Indian skipper for what happened to him in 2017. While playing against West Indies in Jamaica, Williams who will get Kohli out will do his “Notebook Celebration” to send him off. Fans started comparing the videos to show how keen Kohli is when it comes to giving back.

If u are Bad Than I'm Your dad Never ever Mess With King Kohli 👑#Virat 👑🔥🔥 Vintage Virat 🔥🔥 pic.twitter.com/wQwHk5ZEZs

If taking Revenge is an Art,, @imVkohli is Picasso of it 😍❤️😂,, Kesrick Williams did this to Virat in 2017 India tour of windies when he took kohli wicket.. Now Virat Kohli term's to Reply.. #INDvWI @ViratGang pic.twitter.com/iPACs5jlic

Now in a way of accepting it, Virat Kohli while answering to Sanjay manjrekar has said that he doesn’t watched Caribbean premier league to know about the celebration of Williams but experienced it himself in Jamaica. However, the cricketer said that he has respect for his opponents. “That’s what cricket is all about. There are few words out there but smiles at the end. That’s how a competitive game should be. But at the end of the day we gave smiles at each other and had hi-fives. That’s what cricket is all about. Play it hard and have respect for the opponent” said the Indian cricketer.

.@imVkohli on being asked about the 'notebook celebration': "Play hard but respect the opponent" 🙌🙌#INDvWI #SpiritOfCricket pic.twitter.com/mlqwMe2KeJ

What do you think on this statement of Virat ?? Comment your views below !!

Previous articleRajinikanth & Kamal Haasan To Join Hands After 35 Long Years ?? Details Here
Next articleJUST IN : Nayanthara’s Statement Regarding The Encounter !!

Samantha’s Perfect Reply To A Hater After Seeing Nayanthara& Trisha’s Posters Together!!

Samantha's befitting reply to a hater who spewed venom at one of her tweets about the emergence of female centric movies is getting positive...

Due to the rain that playing a spoilsport in the 5th and final T20 match, the series tied with 2-2 and both the teams...