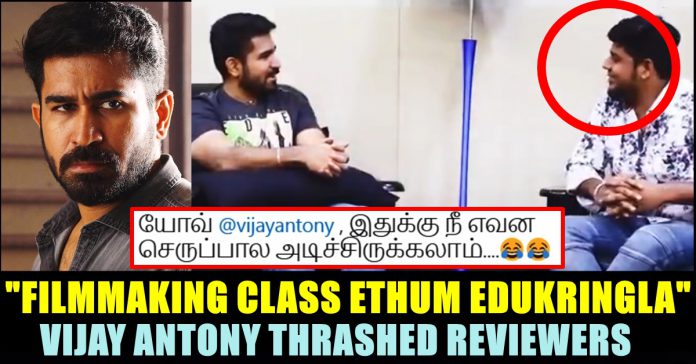 Vijay Antony who got introduction in tamil cinema as music director, evolved as a hero and is now producing films. As he has a bunch of films lined up for release, an one year old video interview of the actor with VJ Abhishek has been going viral among the Netizens who use Twitter.

Cut versions of the 35 minutes long video has been going viral with hilarious captions targeted on the video jockey who tries to explain Vijay Antony about the struggles faced by a reviewer. It is evident through the video interview that both Abhishek and Vijay Antony has a special bond between them as they had conversations before. The actor looked comfortable throughout the interview which made him to speak his heart out.

In the videos which is going viral shows Vijay Antony sarcastically asking Abhishek how it will be if he directs a film. “Are you taking classes for filmmaking ? Can I enroll myself in it ? What kind of courses should I take part ?” Vijay Antony asks the reviewer. “How good it will be if you direct a film?” he can be seen asking. At one point VJ Abhishek himself accepts that he is getting roasted by the actor/musician.

In another video VJ Abhishek asked Vijay Antony about whether he knows about “Life of a reviewer”. “On the release day of every film on Friday, producers who are my friends would inflict their thoughts to me before my review. Fans would expect tickets from me and they will also disturb me during my personal conversations with my wife. Apart from these I should watch the film from very beginning. Should not check my phone. Should not spend much time in interval” said Abhishek to which Vijay would immediately reply by asking “How much loss you are facing every week?”

“So much struggle right ?? You made me realize in just one day” Vijay Antony asked further. Watch the video here :

This video is currently trending with various reactions. Check out some of them below :

On seeing these reactions from all over the twitter, Abhishek Raaja himself came up with a reply by suggesting everyone to watch another interview of them. Check out his tweet here :

Nice to some sudden hatred spewed on me.

Previous articleLakshmi Ramakrishnan Got Cheated By This Man !!
Next articleUdhayanithi Stalin Replied To Those Who Questioned About CCTV Camera !!

A statement from Chinmayi's mother grabbed the attention of netizens. According to Indiaglitz, T.Padmhasini, mother of singer Chinmayi, in a recent interview made statements...

Mersal is a 2017 film directed by Atlee and had "Thalapathy" Vijay in the lead role. Director Atlee who is known for his collaboration...