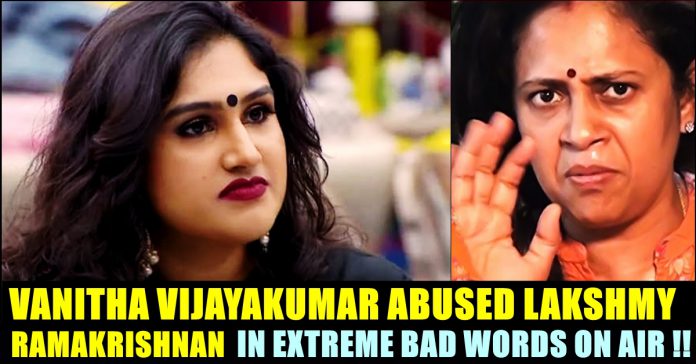 Vanitha Vijayakumar and Peter Paul appeared for the first time in an interview together. In the interview, both them narrated how they met and how it all happened since their first meet. Vanitha said that she met Peter Paul for the first time to hear a script which he is going to direct. Peter Paul was planning to feature Vanitha in a negative character. She who went with her daughters at that time, asked Peter Paul to feature her in another character which impressed aspiring filmmaker. He said that he found her brilliant and proposed her to marry him. They conversed about many other things including why Peter Paul didn’t get legal divorce despite of 7 years of separation.

On seeing the video, Lakshmy said that the way they behaved during their conversation is completely unacceptable and said that their behaviour is “Atrocious” in the video. Vanitha Vijayakumar who got irked, appeared in a live interaction with Lakshmy and abused her directly by accusing her for involving in her personal issue.

When the host of the show tried to make them state their opinions one by one, Vanitha who intervened said that she never agreed for a debate. When Lakshmy said that the host of the show needs to be respected, Vanitha said that she just wants to ask few questions to Lakhmy regarding the earlier interview she gave with Elizabeth. Things turned ugly when Lakshmy asked Vanitha to act with some dignity. Vanitha repeatedly asked Lakshmy who she is to have a say in a problem that took place between herself and Helen.

Ar one point, Vanitha started abusing Lakshmy’s husband, pointing out how Lakshmy reacted to that earlier interview. She even assassinated Lakshmy Ramakrishnan’s character and called her “Garbage”. Lakshmy said that she didn’t want to involve in an argument with a street fighter. When Lakshmy wanted to disconnect the call, Vanitha said that she will record the video and will upload it to tear her apart.

Replying to Lakshmy who said that Vanitha is changing husband every year, the former Bigg Boss star abused Lakshmy Ramakrishnan in extreme bad words on air.

After this interview Vanitha posted a tweet saying that Lakshmy is incapable of answering her single question.

The fake phony judge..@LakshmyRamki
Runs away unable to face questions and has no reply to one question I asked her…she calls herself dignified when she has no qualifications to act as a judge to solve family problems…someone had to end her atrocities https://t.co/xkeQ1U0eDV

This video is spreading insanely viral in online platforms. Earlier Lakshmy Ramakrishnan posted a tweet regarding the issue of Vanitha Vijayakumar and deleted it later after Vanitha confronted her. She even asked apology at that time after getting harsh replies from Vanitha.

Dhoni’s Advertisement As Rajinikanth Got Banned!! Here’s The Reason

One of the Promotional advertisements of Indian Premier League 2022 in which Chennai Super Kings Captain Dhoni imitated Superstar Rajinikanth got banned after a...

In an incident that took place near Kodad town in Suryapet district, Telengana, a woman tied her son to a pole and rubbed mirchi...