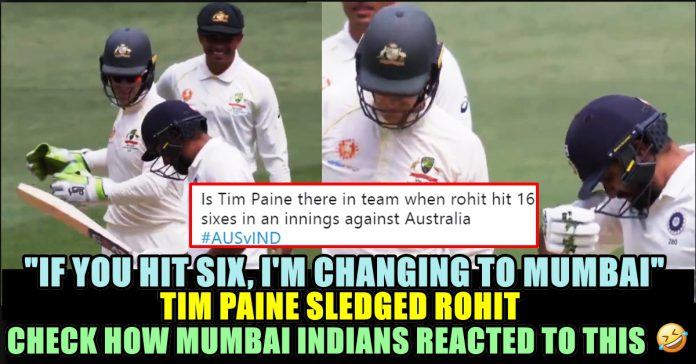 Video Of Tim Paine Sledging Rohit From Behind The Stumps Going Viral !! Mumbai’s Reply Was Hilarious !!

Dhiwaharan
December 27, 2018
Share
Facebook
Twitter
Pinterest
WhatsApp
Chateshwar Pujara scored a composed century,  while Virat Kohli, Mayank Agarwal and Rohit Sharma contributed with a fifty each as India declared their first innings on 443/7. Marcus Harris (5*) and Aaron Finch (3*) started Australian innings hesitantly and managed to take them to 8/0, trailing India by 435 runs at stumps on the second day of the third Test in Melbourne. Earlier at tea, India were 356/4 with Ajinkya Rahane and Rohit Sharma in the control following the dismissals of Kohli and Pujara, who held the fort for nearly five sessions of the third Test.
[wp_ad_camp_1] Rohit remained unbeaten on 63 when captain Kohli declared the Indian innings. The second session had seen an exciting contest between the bat and the ball along with some behind the stumps banter by Australian captain Tim Paine. “If Rohit hits a six here I’m changing to Mumbai,” he was heard saying behind the stumps. India made 62 runs without any loss of wicket in the morning session. Tim Paine is at it again. At the last match, he teased Rohit Sharma and told him that if he managed to hit a six, Paine would become a fan of Mumbai Indians.
[wp_ad_camp_1] Paine further added that he was confused between Royal Challengers and Mumbai Indians. But if Rohit Sharma manages to hit a six against Nathan Lyon, the deal will be sealed.

The video went viral on Internet and to one of a post Mumbai Indians replied in a hilarious way. They posted a caricature of Rohit Sharma meditating which received many loves from the fans.

Along with this you should have mentioned, We don’t need you in Mumbai 😂😂

Vani Bhojan Revealed How She Got Approached For Casting Couch !!

Vani Bhojan who is basking in the success of her recent release "Oh My Kadavule" has revealed how she got approached for casting couch...

A report that emerged saying that the girls of Bengaluru city being able to hire a boyfriend on hourly basis, has grabbed headlines among...