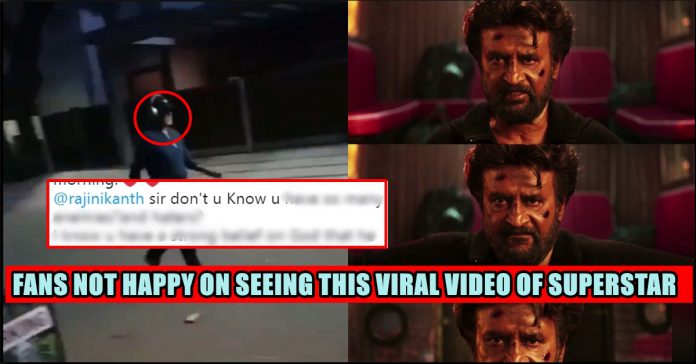 Video Of Superstar Rajinikanth Went Viral !! Fans Are Not Happy For This Reason !! The film which is running very well at the box office receiving positive comments from the critics as well despite being a complete commercial “Rajinikanth” entertainer. Now a recent video of the Petta actor who is 69 years old going for a morning walk with jogging suit went viral on Internet. The video shows Rajinikanth walking in his “typical style” and no sort of body guards seen around which is unexpected.

Andha style even in his walk… @rajinikanth pic.twitter.com/bOxK90jVwj

As soon as the video surfaced in the Internet, it went viral and as expected many fans expressed their sadness as their favourite actor and aspiring chief minister going alone without safety or any kind of security.

Check out his fans concerns here :

As much as I admire his simplicity, I think #Thalaivar should have some security personnel with him at all times. In the past, he was just an actor. But now, he is an aspiring politician with haters everywhere.
Please look after yourself Thalaivaa @rajinikanth

I am not happy at all .
This is Rajini sir walking alone at Early morning.❤❤ @rajinikanth sir don’t u Know u have so many enemies?and haters?
I know u have a strong belief on God that he will protect u.but sir u should be careful.anything can Happen with u.
Plz take care pic.twitter.com/JLCMilogCH

Go for a walk.I am not saying don’t go.but with somebody. ur servant or body guard around u somewhere .and wear warm clothes .

U know if a bastard wait in his car in any street and intentionally hits him and ran away .for people its just an accident .
Of nobody is around .his life is in danger too .why his family is not doing anything for this.and look at his speed of walking .in this age u can fell down

However the video was captured by an anonymous person. On the work front, Rajinikanth is all set for his next venture with A.R Murugadoss which was rumoured to be titled as “Naarkali”. But the director denied it by posting about it in his official twitter account.

“ Naarkkaali” is not the title of my next project , pls stop spreading rumors.

It is also rumoured that Rajinikanth is planning to do 5 more films for his cinema career in which it is also said that Karthick Subbaraj is doing one more film with him.

The news about @rajinikanth doing 5 more films is the news of the decade. People like me who only expect the entertainer out of him, nothing can be more satisfactory.

"Parithabangal" fame Gopi and Sudhakar came up with a clarification video in their you tube channel to brush off the allegations that were made...