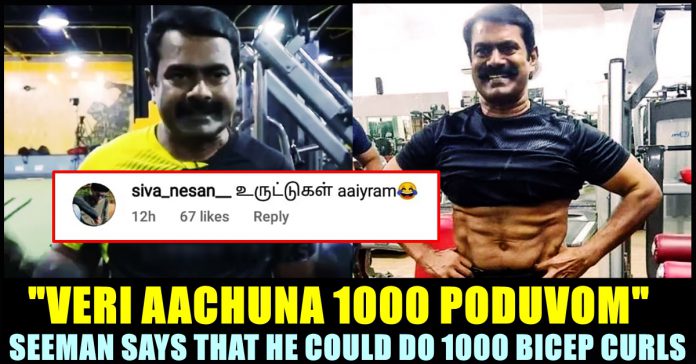 Seeman, chief-coordinator of the political party Naam Tamilar Katchi, in a recent interaction with a youtube channel, said that he would do 1000 bicep curls during his work out, depending on what he ate the previous day. The video is going viral in social media platforms with people wondering how he could say something like that which is humanly impossible, even for a work out freak who competes in body builders contests. Replying to the host of the youtube channel who expressed his admiration over Seeman doing a set of 50 bicep curls, the filmmaker cum politician said that he would do three sets generally that consists 100 curls each and went on to make the statement on doing 1000 nuumbers.

A youtube channel recently covered the work out routine of the “Naam Tamizhar” leader and he also talked about his defence strategies in the interview. Clippings of the videos went viral in social media platforms with meme and funny reactions. Now, a particular clipping of the politician doing a number of Bicep curls with BGM rolling in his background got surfaced.

“I honestly thought that you would give up after lifting it 10 times, it is really inspiring to see you lifting it up 50 times” the host says to Seeman after watching him work out. Replying to him, Seeman says “We would generally lift it 100 times per set.” When he was asked how many sets he would do with 100 lifts, Seeman said that he would do 3 sets usually.

“Sometimes, If we (points out his work out partner) are very much interested in working out, we would do 1000 lifts” Seeman says. “It depends on what we eat on the previous day” he adds. watch the video below :

Check out some of the comments that surfaced for Seeman’s statement :

Beginning his career as a filmmaker in the mid-1990s, Seeman worked in films such as Panchalankurichi and Veeranadai. The failure of his early films made it difficult for him to attract offers as a director and several of his proposed projects were stalled in the late 1990s. He later made a comeback through the successful vigilante film Thambi, though the commercial failure of his next film, prompted Seeman to prioritise commitments as a supporting actor in the late 2000s.

In the early 2010s, Seeman started a Tamil nationalist political party, and has since often been in the news for his controversial statements on Indian social issues. He recently contested in the Tamil nadu assembly elections and failed to win a seat. However, he is one of the very few Tamil nadu political parties that didn’t opt for an alliance while contesting in the electoral politics.

Comment your views on Seeman doing 1000 lifts in Biceps curls !!