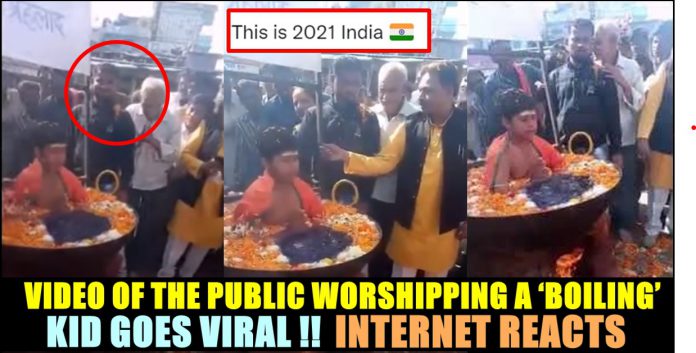 The old video of a small boy doing pooja sitting in a pan with hot boiling water which got surfaced on the internet in 2019 is treading now among internet users. Many controversies are discussed about this incident.

In the video, a small boy is seen sitting in a huge pan which is used to fry snacks in large amounts. The fire is lit under the pan and it is seen like the water is boiling. There are pooja followers put into the boiling water. A boy was almost immersed in the boiling water only his head up to his chest is seen outside the water.

Though the boy is seen like he is boiling in the pan of hot water, nothing happened to him. He doesn’t seem like feeling the hotness of the boiling water into it. Many people are seen around the incident. Superstitiously people believe that the boy had gotten a superpower from the god. And they started to pray with their hands folded.

A few people don’t accept this magic. They report it as a false set-up to make the common people believe. Hidden under the boy’s crotch is a small tank (gas cylinder) filled with CO2. Its cooling capacity, as the gas exits through the slightly opened valve is appreciable. Those bubbles are cold, carbon dioxide gas, not steam. You can be sure he will wait for his minder (the snazzily dressed gent in the yellow achkan and black vest, indicating where to place your offerings) to remove the few burning sticks before he puts his hands into the water to smoothly shut off the valve, allowing the boiling agitation to subside.

Then, for modesty’s sake, he will be given a wrap or dhoti to tie around his waist, if he’s not already wearing one, reaching down to his shins. This hides the gas bottle which will hang vertically when he stands up, dangling from a cord around his waist. The gas cylinder/bottle is of the type used for soda-making machines or paintball markers.  They get fitted with an attachment to the front that holds a captive screw that can be rotated to push the valve open, varying the flow as finely as required.

This video is currently trending among internet users. The Tamil television anchor and sports commentator Sumanth Raman retweeted the tweet post of Sandeep Bisht. Without mentioning anything as a caption, Raman just added the angry emoji of stating his angriness at the cruelty held in India.

Check below the reactions of netizens.

there is something hiding you can see the boiling is on only one place…. there is no boiling in other places

Hindus
They don't eat meat
But they are very much into cooking one..
Lovely..

Hindu Faith on display. Am sure non Hindus must be watching this.

Previous articleTamil Nadu Finance Minister PTR Explained Why He Replies To Online Trolls !!
Next articleAesha Opens Up About Divorcing With Shikhar Dhawan!!

Vishnu Directly Slammed This Award Function For Not Considering “RATCHASAN” !!

Vishnu Vishal is one of a very few emerging actors who loves to experiment himself in films. He is the protagonist of the first...

Actor Vijay, last seen playing a corporate in AR Murugadoss’s Sarkar, is all set to essay the role of a football coach in Thalapathy63...