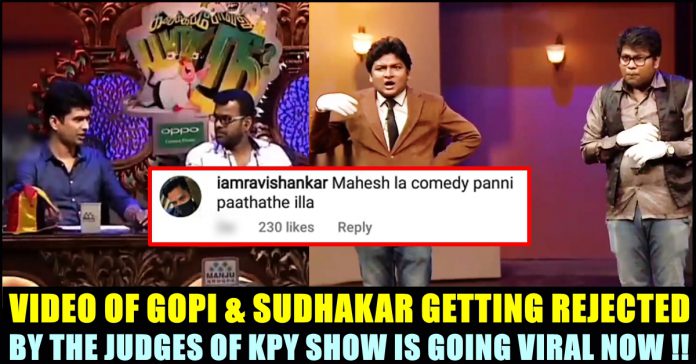 A video of “Parithabangal” fame Gopi and Sudhakar performing in the state of Vijay Television before initiating their youtube stint is going viral in Instagram now. It is very well known that Gopi and Sudhakar, videos and photos of whom are being used to make trolls and memes nowadays, tried to enter the most famous “Kalakka povathu yaru” show of Vijay Television as contestants. They got rejected by the judge panel of the show, citing lack of humour in their performance.

However, the duo, tried hard and gained a separate fan base across all the age groups and regions through their sketch videos. Currently, their youtube channel “Parithabangal” is enjoying 2.89 milion subscribers with at least million views for each video. Now, the video of their performance and the way they got rejected got surfaced in social media platforms with people expressing various kind of reactions against the judges who rejected the duo.

In the video, Gopi and Sudhakar could be seen spoofing the most popular Tamil dubbed Hindi serial CID. Gopi played the role of ACP Pradyuman whereas Sudhakar played Dr. Salunkhe. Erode Mahesh, Priyanka, Sethu and “Thaadi” Balaji were the judges who chose contestants from the audition process. Interrupting their performance, “Erode” Mahesh imitated Gopi and asked Balaji “Salonki, shall we select these two ??”

Replying to him, Balaji replied saying “If we select them, I will get rejected from the show”. “Better luck next time” Mahesh said to Gopi and Sudhakar. When Gopi stayed in character and asked whether he got selected or not, Mahesh reiterates, ” Definitely you are not selected, you can leave”

Users of Instagram flooded the comment section of this post by expressing their displeasure over the judges of “Kalakapovathu Yaru” show. “Balaji and Mahesh couldn’t do 10 % of what Gopi and Sudhakar could did in comedy” said a user whereas another one said “I have never seen Mahesh’s comedy performance”

In an interview that took place in 2020, “Erode” Mahesh said Gopi and Sudhakar are performing really well nowadays. “Audition is a huge process and we see lot of contestants. We decided only based on the performance they provided on the stage of “Kalakkapovathu Yaaru”. It all depends on whether they perform well or not in that particular situation” Mahesh said who added that most of the parts could have been chopped during the edit.

Previous articleRhea Chakraborty Named As The “Most Desirable Women 2020” !! Internet Users Raised So Many Questions
Next article“Casteism Is Alive & Thriving In The US” – Tamil Girl After Sharing Flat With An “Upper Caste” Vegetarian In US

As promised, the teasers of Queen remakes were released on Friday in Telugu, Tamil, Malayalam and Kannada, respectively. Tamannaah Bhatia stars in the Telugu...

English cricketer Ben Stokes, on Monday, broke his silence on the recent "run out" controversy that took place between team India and England for...