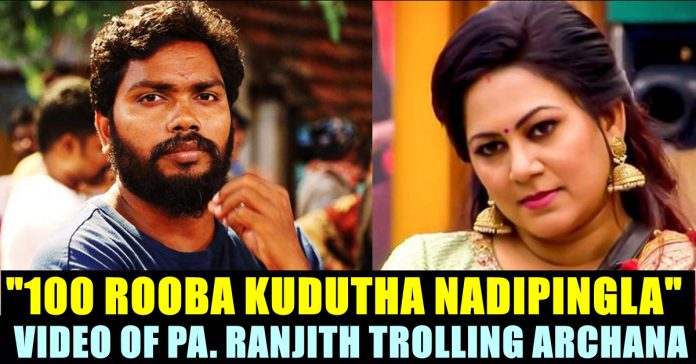 A 15 year old video of director Pa. Ranjith pranking anchor Archana is doing rounds now in social media platforms as both of them are making a significant mark in their respective fields. Pa. Ranjith who changed the face of Tamil cinema through his films, is currently producing 10 plus films under his banner and has directed Super star Rajinikanth twice in a very short span of time. His directorial “Sarpatta Parambarai” is awaiting for the release as well. Meanwhile anchor Archana who took part in the Kamal Haasan hosting Bigg Boss show, got recently evicted due to the less number of votes she received. Now, an old video of the filmmaker involving in a prank show as a prankster to troll Archana is trending in the internet.

Archana Chandhoke who is known for hosting TV shows entered the Bigg Boss house as the 16th contestant. Her shows such as “Ilamai Pudhumai”, “Kalakka Povathu Yaaru”, “Sare gama Pa”, “Comedy times” gained her the fame. She made her re-entry into the media industry and once gained huge acclaim after interviewing Superstar Rajinikanth for Zee Tamil channel after 2.0 release.

The prank was planned by a friend of Archana with the help of team “Halwa” which consists director Venkat Prabhu, Pa. Ranjith etc. Ranjith who assisted Venkat Prabhu in his debut directorial Chennai 28, played the role of a prankster for this episode of “Halwa”.

In the video, we could see an impulsive Ranjith approaching Archana who is sitting at a restaurant with her friend by introducing himself as an assistant director of Manirathnam. “I have a script for you, please listen” he requests to Archana and could be seen asking her to spend time with him listening to his script.

Archana tries to avoid him reasoning her “Ilamai Pudhumai” shoot but fails. Ranjith further narrates his script in an impulsive manner and making her feel uncomfortable with his weird story. At one point Archana says that she is married and asks Ranjith to leave but the latter insists on convincing her husband.

On seeing her repeatedly refusing to act in his film, Ranjith asks “What’s you demand to act in the film ? How much do you want for one day ? Is.100 enough ? Will you act perfectly if I give you 100 rupees per day ?” to which Archana responds by asking back “What ?? For bus fare ??”. She further asks whether it is a low budget art film. “Who told you ?? The scene I narrated you alone would cost Rs. 2 crore” Ranjith says and trolls Archana by saying that he is not asking her to do heroine role but a role of a junior artist.

At the end, the producer who was accompanying Archana gives her the “Halwa” and reveals that it is just a prank. Venkat Prabhu enters the frame and pats Ranjith on his back.

Fans of director Ranjith sharing the video in social media platforms reacting in various ways. Many of them awed the spontaneity and humour sense of the “Kaala” maker. They enjoyed the impulsive younger version of the filmmaker who is currently talking about topics through his films that are creating debates among public. The video turned viral as Archana is also in limelight due to her participation in Bigg Boss show. Comment your views !!

On 28th of June which marked the 26th day of "Vikram", Lokesh Kanagaraj, as he promised in the post release interviews, has released the...

A 52 year old man who belong to Delhi got arrested for using national flag to clean his scooter. The legal action took place...

Electricity Minister Senthil Balaji Replied To A Citizen Who Is Facing Power Cut In Regular Manner!!

A tweet thread uploaded by a Twitter user about the struggles he has been facing due to regular power cut, grabbed the attention of...