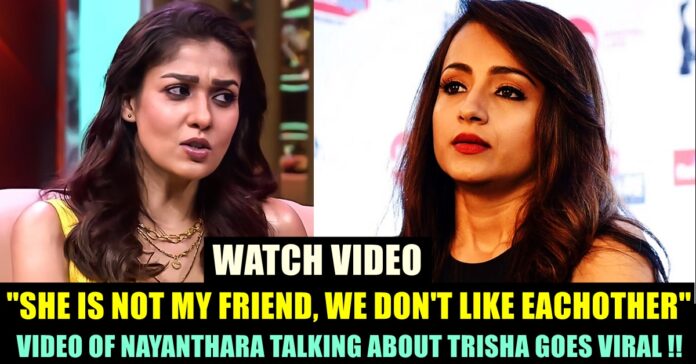 A 12 year old video of actress Nayanthara talking about the rift she had between her co star Namitha and colleague Trisha is trending in the micro blogging social media site after the actress got married to the love of her life. In the video, a young Nayanthara could be seen talking about why she stopped talking with Namitha and about her relationship with actress Trisha.

“While acting in Billa, first few days we were alright. We both will talk and I would initiate the conversation. She stopped talking all of a sudden” Nayanthara about Namitha in the interview.

“She started behaving strangely and I couldn’t understand why she was acting that way. We all will be sitting together. She will come and say ” hi” to everyone and would ignore me intentionally. We didn’t fight, we didn’t have any argument or have any issues. She behaved that way suddenly and I stopped talking as well” Nayanthara said in the interview.

“If they are having problem, it’s their’s. We couldn’t do anything” the actress who is currently not attending any face to face interview said. When the host asked the actress to talk about the friendship between herself and her colleagues such as Shreya and Trisha, Nayanthara said “Friends is a huge word, can’t use such words for them”

“I know them but they are not my friends. There are some kind of problems between us and I couldn’t mention it specifically. There is a belief right, two women couldn’t be together. It’s just like that. I don’t have any problem with them, if they are having with me, I wouldn’t talk with them and I wouldn’t bother about it”

On talking about whether she took any initiatives to talk with them, Nayanthara said that it is not needed and added that she will do it only if they are her friends. “They would write in papers that there are cat fights between me and Trisha and we have competition. There’s nothing like that. Maybe we don’t like each other, if she don’t like me, I also wouldn’t like her” The actress further added.

Nayanthara got married to Vignesh Shivan on Thursday in a grand ceremony that took place in Mahabalipuram. Nayanthara is one of the very few female actors who rules Tamil film industry for more than 15 years. Being the highest paid actresses of South Indian film industry, Nayanthara is also the only actress who manages to act in both female centric movies and hero oriented movies. The surprising fact about it is that the “Bigil” actress shines in both the regions.

She who debuted through a film named “Ayya” which was released in the year 2003, as acted in more than 75 films so far. She was last seen in “Kaathu Vaakula Rendu Kaadhal” of her husband and has a half a dozen of projects going through various stage of production. “02”, “Connect”, “Paatu” are some of the notable projects of Nayanthra which are awaiting for release.

Comment your views on the actress’s bold and transparent answered provided 12 years ago!!