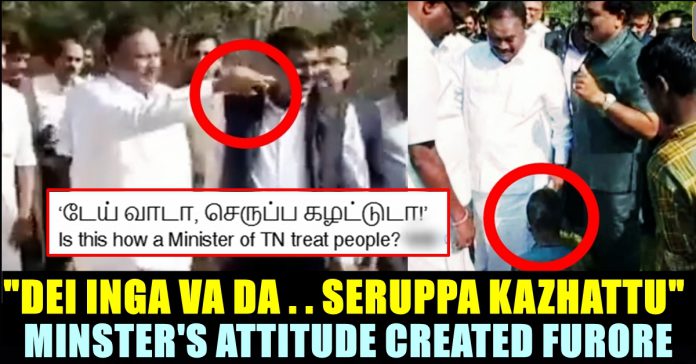 Video of Minister Dindigul C Sreenivasan who serves as Minister of forests, demanding a little boy to remove his sandal has surfaced in Internet. The Minister who visited Mudumalai Tiger reserve to inaugurate Elephants welfare camp, is facing the wrath of social media due to his activity. The video which shows the minister asking a boy to remove his sandal while he is on his way, has created furore in social media platforms.

The minister who thought of visiting a Ganesh temple located in the place to conduct Poojas for elephants, got down from his car and approached towards the temple by walking. On his way he called a kid by yelling ” Dei Inga Va Da” (Hey you.. Come here). Further he can be seen asking the boy to remove his sandal by pointing his foot. The boy who removes as he said leaves the place which was filled with police officers and politicians.

This incident has created huge controversy and people who belongs to the place has expressed their displeasure. Watch the video of the incident here :

When this minister can’t even bend his body to remove the footwear on his own, he should avoid wearing those with buckles. While leaving home, the menial staff would have helped him wear them & so in a public place he thinks nothing wrong in asking a child to remove it for him.🤦‍♂️ pic.twitter.com/oMYenGkZ5h

On seeing a minister who has the responsibility to serve the people of the state, involving in such incident disappointed the people. Those who watched the video are started expressing their frustration through their posts in social media platforms. Check out some of their reactions below :

This could be the reason for #PuratchiThalaivi not allowing these ADMK Ministers to speak when she was alive!!

This should be condemned 😠😠😠😠😠… pic.twitter.com/tsxMNe7Y9S

Now the latest update about the Minister giving clarification about his activity has been updated by Puthiya Thalaimurai. “When I was on my way to visit the temple, those boys were playing nearby. Assuming him as my grandchild, I asked him to take off the buckle of my sandal. He is just a small boy. I didn’t ask any elder people to do that.” said Sreenivasan who denied the accusations against him.

What do you think on this clarification provided by the Minister ?? Comment your views below !!