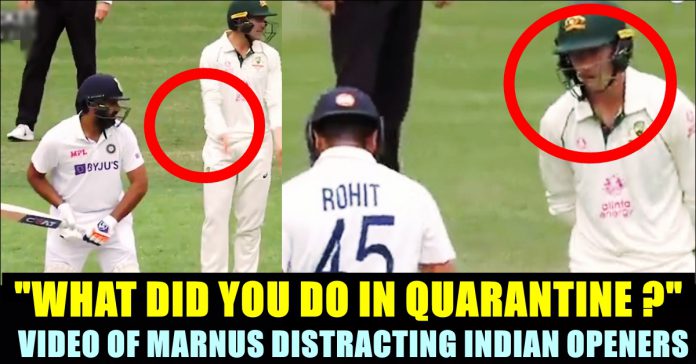 After letting Australia to score 338 runs in the first innings, Team India came in to the middle to start their batting innings. Ravindra Jadeja picked four important wickets and caused the run out of Steve Smith with a direct hit which helped team India to restrict the home team from scoring a mammoth total. Shubman Gill and Rohit Sharma opened for team India and are going well so far. Team India saw a fifty runs opening partnership for the first time in 14 innings with the help of the duo.

To break the partnership, players of Australia are giving their everything in the field. Nathan Lyon almost got Rohit Sharma out as the on field umpire gave a wrong decision for a catch in the short leg. However, Rohit took a review and survived. Later, he got out for 26 while facing Josh Hazlewood. Meanwhile, a video of Australian opener Marnus Labuschagne trying to distract India’s opening pair is doing rounds in the social media platforms.

Labuschagne who scored 91 runs in the first innings, played a major role in Australia reaching 300 plus runs after Steve Smith. He was fielding at the short leg and decided to get the wickets of Shubman Gill and Rohit Sharma by doing his part it seems. While the 21 year old was in crease, Marnus could be heard asking him to say his favourite player.

“Favourite Player ?? Who is your favourite player?” Marnus asks Gill to which he replies saying “I will tell you after”. “After the ball?” Marnus continues talking to him. “Sachin ? Do you reckon Virat?” he asks. While Rohit Sharma was about to face a delivery, Labus says “This is a catch !! Catch here” to his teammates. When he left a ball which went outside off stump, Labus shouts “That was a lowey”.

“What did you do in quarantine?” Marnus further asked Rohit Sharma only to get no response from him. He also asks for a throw from his teammate and looks at him puzzled after he throws it to the wicket keeper which was loved by the commentators.

The video is going viral among the fans of cricket and they started reacting in hilarious ways. “haha, Oh Marnus! he is getting ignored by the opposition as well as his own team mates.” wrote a twitter user whereas another one said “Just gotta love this paithiyam”

haha, Oh Marnus! he is getting ignored by the opposition as well as his own team mates.

Garry, here please !
is going to be big meme template.

Comment your views on these questions asked by Marnus Labuchagne to Indian openers.

Director Karthick Naren's unreleased film "Naragasooran" which was highly anticipated to be released as his second film, is yet to see the light. However,...

One of the most active twitter handle of a cinema hall is undoubtedly belongs to Ram cinemas which is located in Tirunelveli. Known for...