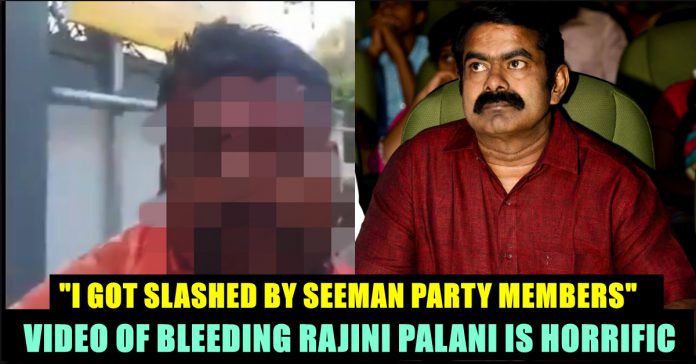 We need no introduction for Seeman, a Tamil politician, Tamil Thesiyam ideologist and the chief-coordinator of the political party, Naam Tamilar Katchi in Tamil Nadu. His ideologies and his thoughts on actor Rajinikanth and Kamal Haasan entering politics is known to everyone who listened to his speeches in press meets.

Now a shocking video of a man who belong to Rajini Makkal Mandram named Rajini Palani is an utter shock which is also going viral in social media platforms. In the video Rajini Palani who is bleeding all over his face, says, “Vankkam Police… I am Rajini Palani from Salem district. Men who belong to Seeman party slashed me. Please ..” he collapsed.

Following this a video of Rajini Palani doing well after getting treatment in hospital also surfaced in Twitter. The video also showed Police officers enquiring him about the alleged incident to Rajini Palani.

It is really sad and scary to see two emerging political parties of Tamilnadu involving in a horrific act like this. We hope this ends here and a healthy rivalry to grow between these two parties.