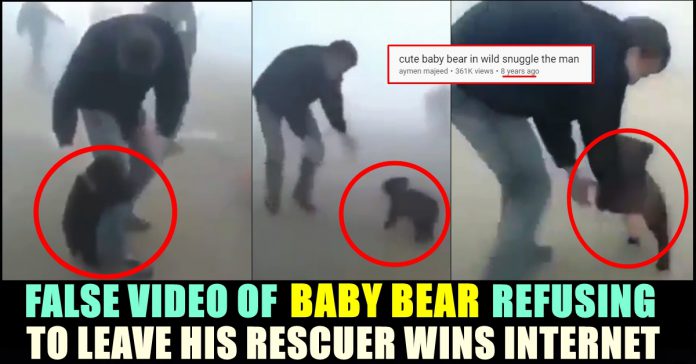 The bushfires of Australia is raging and burnt down thousands of acres of land and made many citizens and wildlife animals homeless. This led people across the world in social media to pray for the well being of the country and for the lives struggling in it. #PrayFor Australia hashtag trended worldwide with 1.07 million tweets. Meanwhile pictures and videos of the rescue operations and the firefighters are also doing rounds in social media with various kind of captions.

According to reports, it has been said that 24 people, 8,000 Koalas, 500 million other animals were dead due to the destruction. Around 1400 homes and 5.5 million hectares burned. The report also suggests that more than 10 million people faced toxic bushfire smoke.

Meanwhile, according to many leading news portals, a video of a bear cub refusing to leave a man who rescued him from the bushfire is winning hearts of the Internet users. Several news portals including India Today has been sharing the video by saying that it happened in Australia bushfire. The video was shared by a twitter user named as Julie Marie Cappiello who is an activist according to her bio. The fifteen second long video shows a bear cub tightly hugging a leg of the rescuer. When he tries to move, the bear was seen running towards him which left the netizens teary-eyed.

Sharing the tweet Julie wrote “This bear, rescued from a fire, won’t let go of the man who saved him. 🐻 💓”

This bear, rescued from a fire, won’t let go of the man who saved him. 🐻 💓 pic.twitter.com/lY3wpbpYfI

The video was shared on the first day of January and attracted nearly 7,000 likes so far. People from the micro blogging site are expressing their emotions through the comment section and we can see them pouring love towards the duo. Check out some of their reactions below :

I thought that too 🐾

Hope this little baby is taken care. Love & Thanks to the rescuers ❤🙏

However, it has been proved that this incident didn’t take place in Australia bushfire as we can see the video uploaded in youtube 8 long years ago. We found the video in youtube with a title saying “cute baby bear in wild snuggle the man”.

The video garnered more than 3 lakhs views as of now. What do you think on this old video being shared as the video shot in Australia bush fire ?? Comment your views below !!

A verbal spat broke out between the fans of Tamil and Telugu film industry after the release of Manirathnam's "Ponniyin Selvan". While fans are...

After Pant denied four runs for a blunder committed by the umpire, netizens fumed at the International Cricket Council by saying that the rules...