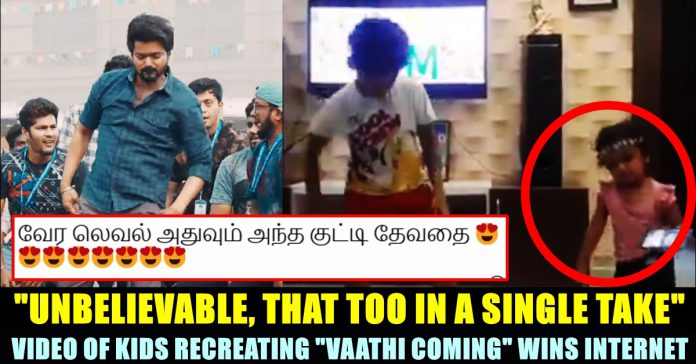 Video of a kid recreating the most famous song “Vaathi coming” from “Master” is doing rounds in social media platforms with reactions lauding him for his observation. The video also shows a smaller kid performing the trademark “shoulder step” along with him. The duo became a trending topic among the fans of actor Vijay as their moves got captured as a 2 minute long video.

Even after the film completed its theatrical run, the craze created by the “Vaathi coming” of Vijay starring “Master” is still unwinding. Before getting released in theatres, the Aniruth’s fast number released on youtube and left the fans humming. It was played as a wake up song for the contestants in the season four of Bigg Boss show. After the visuals got released, the song attracted millions and millions of fans along with celebrities from other notable industries.

Ashwin went one step ahead and made his teammates Hardik Pandya and Kuldeep Yadav to shake their legs for the song as well. “Vaathi should be happy!!  with @hardikpandya93 @kuldeep_18” the cricketer wrote while releasing the video in his official Instagram account.

South Indian actress Nazriya who is known among Tamil audience for her films “Raja Raani”, “Neram” came up with a video dancing for “Vaathi coming” in a most cutest away. The actress who took a break from the film industry after marrying actor Fahad Fazil, made her come back through Anjali menon’s “Koode”. After that she appeared in a film named as “Trance” along with her husband.

On Thursday, she uploaded a video of herself recreating the dance movements of actor Vijay in the opening song of “Master” and wrote “Cuz Vaathi is trending ……😆why not 😈” as her caption.

Now, a 2 minute long video of a kid recreating the entire steps of “Vaathi coming” song has astonished the Internet. Actor Vijay who is known for attracting the kids with his screen presence, has influenced the kid to dance uninterruptedly for two long minutes.

Actor Shanthanu who acted along with Vijay in “Master”, came up with a tweet asking the parents of the kid to train him dance. “Whoever this kid is … pls let him train … he’s got the flare for dance and I’m sure he will turn out to be a fantastic dance” his tweet read.

Whoever this kid is … pls let him train … he’s got the flare for dance and I’m sure he will turn out to be a fantastic dancer 🔥🔥👍🏻💥 https://t.co/2U9zTgULOG

The video is receiving accolades from all over the Internet. “Namala vida verithanamana fanah irpan pola” wrote a Vijay fan after seeing the video whereas many others showered their love on the little kid whose cameo was just the icing on the cake.

Unbelievable, that too in a Single Take!
How can someone remember every single step of the 3-minute song?
Pure talent ❤