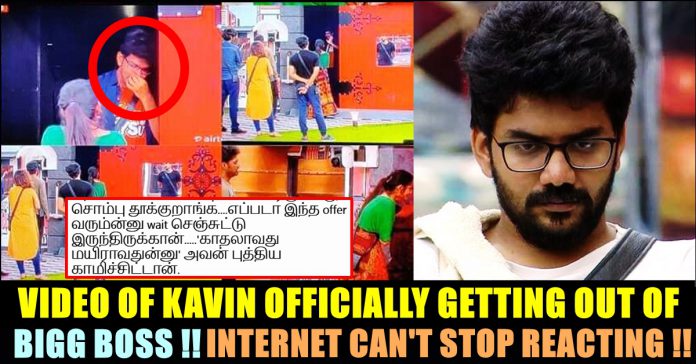 Bigg Boss, the most happening show right now left the audience with sheer suspense in yesterday’s episode as one of the male contestant Kavin volunteered himself to go out of the house without competing in the final week. The reason behind his decision is Bigg Boss’s offer of providing 5 lakh to the one who walks off.

Yesterday’s episode abruptly ended with Kavin saying “Thala Nan Poren” to Bigg Boss and the continuation of it was shown by Vijay television in the first two promos. Now, in the third promo, Kavin was seen leaving the house by having his final few words with Losliya in the Bigg Boss house for the last time. Sandy, the dear friend of Kavin was seen shedding tears and Losliya who couldn’t bear the pain of Kavin leaving the house keeps her hand between the closing door.

Watch the video by clicking the icon below :

As soon as the video and news surfaced, viewers of Bigg Boss couldn’t resist themselves from reacting to it. Check out some of their reactions here :

He is the winner for me #Kavin he will be happy to see the FAN Following he has. We welcome you in the real world with loads of love. @Actor_kaviin Welcome our HERO #KavinRealWinnerofBB3

No more Bb3 for me
Rip TRP🤣 @vijaytelevision & #BiggBossTamil3 #NoKavinMeansNoBiggboss

Why did I start watching BB ? Why did I start liking Kavin n Los ? Why I can’t accept Kavin leaving the show ? Why I’m scrolling tweets to see he is not ? Why I’m waiting for other promos ? Why badly want to see Los winning if Kavin bro goes in worst case ?#kavin #BiggBossTamil3

One who didn't care about anything want #Kavin to stay in the house n Another wants #Losliya to play for her family😭 How beautiful a relationship can be? This much understanding is surreal in this selfish world 💗 #KavLiya won our hearts 💖#BiggBossTamil #BiggBossTamil3 pic.twitter.com/Tzw4ObKwp3

Kavin gave hope to his ex outside and left

Kavin gave hope to sakshi and left her

Kavin gave hope to Losliya and left her

Kavin gave hope to his fans and is he going to leave them too?? #BiggBossTamil3

What do you think on Kavin terminating himself ?? Comment your views below !!

The 'Men in Blue' will be seen in an all-new avatar during the upcoming clash with England in the ICC World Cup 2019 on...