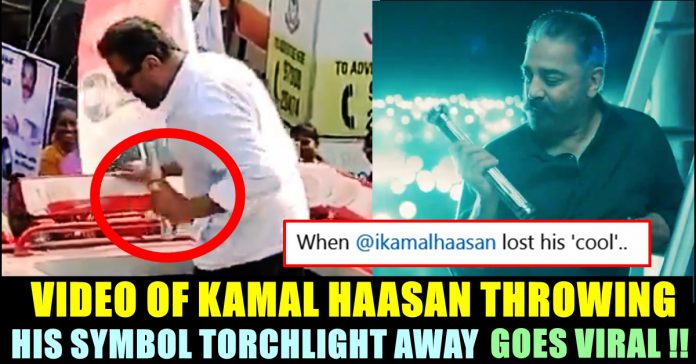 During a road show in the streets of Tamil nadu, actor turned politician Kamal haasan who is going to contest in the electoral politics for the first time as an MLA candidate, has lost his “cool” and threw his party symbol away out of frustration. It is believed that the actor couldn’t hold his nerves due to a technical glitch that took place while he was interacting with the people.

As the election is nearing, leaders of various political parties are busy campaigning for their respective political parties. President of newly born “Makkal Needhi Maiam” Kamal Haasan is also giving his everything to make a significant impact in the upcoming assembly election.

The actor who is known for his word play, in a recent meeting of his party, allegedly compared himself with scientist and former president Abdul Kalam and became a subject to severe online troll. However, the original video which got surfaced said a different story. Read : Kamal Got Brutally Thrashed For His Statement About “Abdul Kalam” !! Watch The Original Video Here. Now, a video of himself throwing his party symbol torchlight out of frustration is going viral in social media platforms.

It has been reported that the actor got frustrated over his micro phone not working during the road show and threw away a torchlight which he was carrying in his hand while making his campaign speech. The video is going viral on social media platforms with various kind of reactions.

It is indeed strange that we haven't yet seen any academic papers on the violence of Iyengars in personal and political spaces.

This Famous Singer Shares Those Cheap Messages She Received In Social Media & Asks How To Track Him !! SHAME !!

Social media is a place where anyone can personally text any individual they want. It equally allows a single person to create multiple accounts...

Fans Blaming KL Rahul For The Unexpected Loss Of Punjab !!

In a yet another last ball thriller, Dinesh Karthik led KKR team once again clinched the victory in a match which was not going...

On Thursday, Kollywood filmmaker SP Jananathan who is known for directing significant films such as "Iyarkai", "Peranmai", "Porampokku" found unconscious at his residence and...