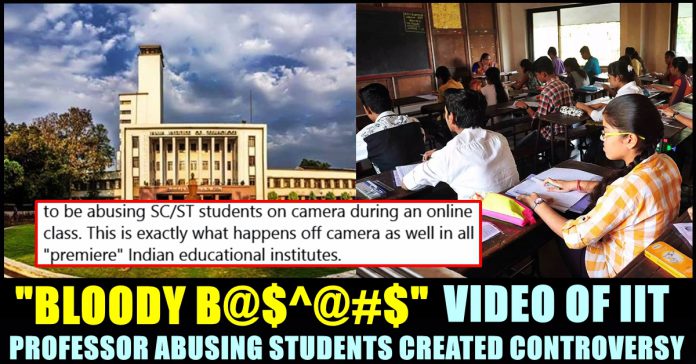 A video of Seema Singh, associate professor of Humanities and Social science in the Indian Institute of Technology, Kharagpur has created huge controversy among the users of social media as she could be heard abusing the students during a virtual class. On seeing her repeatedly calling the students as “Bloody B@$*@*#” in the video, students and public demanded a termination.

She allegedly called the students of a preparatory class as “Bloody B@$@#” for unknown reasons. It is a class where a batch of students from Scheduled castes/Scheduled tribes and persons with disability categories attend in order to get qualified for a seat in IIT next year. The class is conducted because the above mentioned students couldn’t get a direct admission to IIT through JEE advanced.

How are students from oppressed/minority backgrounds expected to study in premier institutes of higher education when this is the treatment they receive? The professor is brazenly abusing them AND their parents.

Would she have found this confidence if this weren't the norm? pic.twitter.com/pSVak563gD

Most institutes have retained their previous fee structure for online classes even while operating costs have fallen drastically. Some have even hiked fees during the lockdown period (for example, NID).

Higher education is being fenced off for the upper caste-upper class folks. pic.twitter.com/pjiJuFNtI2

The student community of IIT Kharagpur shared the video on the Facebook page and released a statement saying that the professor overreacts lot in her classes and abuses the students and their parents. National commission of scheduled castes along with the ministry of human resource and development described the abuses as “casteist”.

One of the videos showed the professor dubbing a student as “silly” after he asked permission to take leave through mail reasoning his grand father’s demise. “Nothing can prevent me from what I have to do to you” she tells the students after daring the students to report her.

The videos from the virtual class of Seema Singh are making headlines and social media users are condemning the act of her.

Seema Singh, professor from IIT Kharagpur has been found to be abusing SC/ST students on camera during an online class. This is exactly what happens off camera as well in all "premiere" Indian educational institutes.

Dalit and Adivasi students were mistreated vulgarly for caste by a faculty member Seema Singh of #IITKharagpur in an online class
Immediate action must be taken against her under #POA_Act.
Strongly condemn this type of harrasment exercised by an IIT Prof.#End_Casteism_In_IIT pic.twitter.com/9Rx8GTn19W

When oppressed caste students are struggling to survive the cruel pandemic &Coping with online teaching,it is these Vile Casteist professor's like seema singh of IIT Kharagpur amplify the agony of Dalit Adivasi Bahujans.#End_Casteism_in_IIT

Registrar Tamal nath said that he got an email few hours ago in this regard and assured that IIT do not support such language. “We will take some action” he said according to The Hindu.

On seeing Samyuktha revealing about the voting stats to Balaji Murugadoss inside the Bigg Boss house ahead of the grand finals, netizens who are...

Madhavan's hilarious tweet after testing positive for COVID 19 virus made his followers to do both laugh and pray for his speedy recovery....