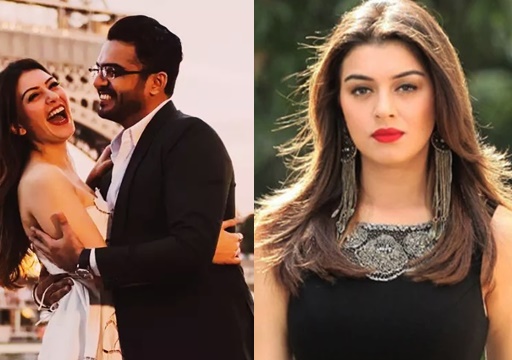 Indian actress Hansika Motwani officially announced about her upcoming marriage event through her Instagram handle and grabbed the headlines on Wednesday. With many celebrities and fans wishing the actress “a very best marriage life” ahead, a video of herself dancing at her fiance’s first wedding is going viral in the internet platforms with various kind of reactions from fans and online users.

On 2nd of November, Hansika confirmed her engagement with Sohail Kathuria, an entrepreneur with a romantic post that consisted a series of pictures of the duo posing in front of the world famous Eiffel tower.

Through the pictures, Sohail could be seen proposing to the “Engeyum Kaadhal” actress for the wedding. The post also suggested that the actress is happily accepting the proposal. Sharing the pictures, Hansika captioned it as “Now & Forever” with a heart emoji.

From Kajal Agarwal to Anushka Shetty, hundreds of celebrities came up with replies wishing Hansika for the announcement she made. The actress also grabbed the headlines of top media portals and twitter trending for the day.

In the meantime, netizens were keen enough to find an old video in which the actress was seen dancing at the first wedding of her “would-be” and concluded that the latter is a divorcee.

Hansika Motwani and the Mumbai based Businessman Sohail Kathuria are going to get married in the first week of December. Netizens found out that it is not the first marriage of Sohail as the video shows him getting married to a woman named, Rinky. The wedding took place at Goa in the year 2016, as per the reports.

The most surprising fact about the viral video is that actress Hansika could be seen dancing at the Sangeet ceremony of her “soon-to-be husband’s” first wedding.

Right from attending the Rocks party and dancing heart out at a pool party and Sangeet ceremony, the 31 year old actress was a part of all their wedding events. It is notable that Hansika and Sohail are business partners as the latter serves as a designated partner for the event management company owned by the Indian actress.

The marriage event of Hansika and Sohail is going to take place on 4th of December at Jaipur, Rajasthan. A very few members from the film industry are expected to take part in the grand event, preparations for which has already begun.

Hansika debuted to Tamil film industry through Dhanush’s “Mappillai”. After that she appeared in several commercially successful Tamil films including Engeyum Kadhal, Velayudham, Oru Kal Oru Kannadi, Theeya Velai Seiyyanum Kumaru, Maan Karate, Aranmanai, Manithan, Bogan etc. The 31 year old actress enjoys a huge fan following across the country as she worked in almost all the prominent film industries in India. She was last seen in her 50th movie called “Maha” and is expected to act in more movies post marriage.

Pawan appeared for an interaction to a youtube channel after his controversial speech in Asuran 100 days celebration. Before starting his speech Pawan has...