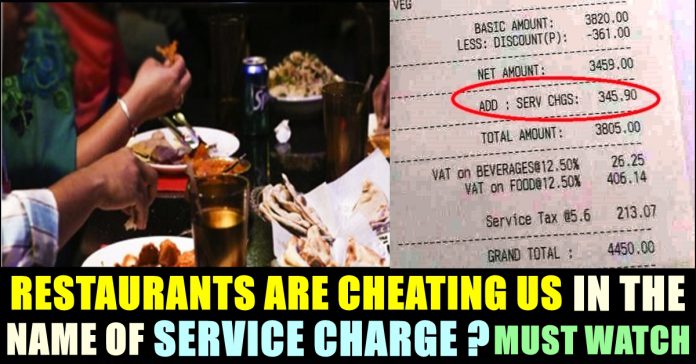 It is shattering to realize that many of us who are eating in restaurants often are not aware of this fact about Service charges. Eating in restaurants is always not a pleasant experience, especially to those who pays the bill. The moment you realize that you have to pay some extra money as taxes and charges more than what you have ordered is real pain which most of us would realize only when the bill arrives.

A youtube channel named as Pongal Vadai has attempted a social experiment video by questioning few restaurant owners on why they haven’t let their customers know that Service charge is optional. The video shows a guy involving in verbal spat which few authorities of restaurants on this Service tax issue. He asked the restaurant owner why they are including service charge in bill.

This video goes viral in social media platforms where people are requesting others not to pay service charges if they are not interested. Check out some of their reactions here :

According to Economic times, Service charge is not a tax, and therefore, restaurants are not legally bound to enforce it. The amount of service charge a restaurant levies is entirely at its own discretion. Typically, 10% is charged, and it is mentioned on the menu.

What do you think on restaurants adding Service charge in the bill without letting the customers know that it is optional ?? Comment your views below !!

On Tuesday, actor Arya appeared in front of cyber crime wing of the Chennai city police after the police officials summoned him based on...

When A.R Rahman Got Humiliated In School For Not Attending Classes !! WATCH

Amidst the controversies that are doing rounds surrounding the Padma Seshadri Bala Bhavan group of schools, an old video of A.R Rahman narrating about...