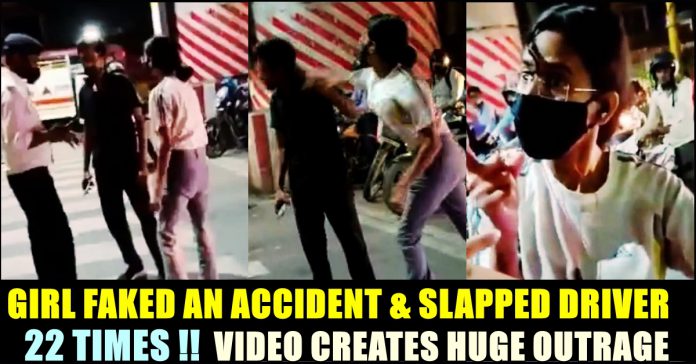 A hashtag saying “Arrest Lucknow Girl” is trending in the micro blogging social site with several tweets demanding arrest against a girl who was caught beating a cab driver in public. The incident took place at Awadh crossing that is located in Lucknow. The incident created debate among the online users on whether the girl should be punished for what she did or not.

In the video, the girl could be seen slapping the cab driver multiple times and also breaks his phone. She also attacks the man who comes in to defend the driver. She claimed that the car of the driver had hit her and cited it for thrashing him. The viral video had sparked huge outrage among the public with people questioning the girl’s behaviour.

However, the CCTV footage had suggested a different story as the girl could be seen trying to cross the road while the road is busy. When the cab driver stopped his car on seeing her on his way, she could be seen instigating the dramatic situation. She reportedly broke his car mirrors. The cab driver could be heard seeking help from public and says that the woman broke his phone.

When the public intervened to calm the situation, she started beating one of them too. A recent report suggested that an FIR has been registered by UP Police under sections 394, 427 at Krishna Nagar Police Station. Watch the Video below :

“The video of that girl thrashing a cab driver on the streets of Lucknow is absolutely outrageous! She has been rightly booked by police. Action must be taken against her” commented a journalist in his tweet whereas another one said “Can a woman abuse, threaten, assault & if this wasn’t captured on video, she could have said that the man molested her & this was her self defence. Is @Uppolice
sleeping or accepting this as new India? Important to #ArrestLucknowGirl & set precedent.”

#ArrestLucknowGirl
Public are just watching like any movie shooting is going on!
Just because, We are Men, we are bound with so much Responsibilities and we don't need equality 🙂 pic.twitter.com/CtI3etQu1w

Can a woman abuse, threaten, assault & if this wasn’t captured on video, she could have said that the man molested her & this was her self defence. Is @Uppolice sleeping or accepting this as new India?
Important to #ArrestLucknowGirl & set precedent. pic.twitter.com/P4VN7RRp5B

22slaps and at the end the boy is in jail..victim of fake feminist

When you slap someone in public & keep doing it for 22 times in a matter of less than 2 minutes, anyone would be traumatized The trauma is stuck in his brain for forever. it was brutal everyone should condemn this no matter who you are. the girl is shameless#ArrestLucknowGirl pic.twitter.com/MPyWh3w932

The parents should be counseled as well for raising such a filth. I would have knocked her tge f out . #ArrestLucknowGirl pic.twitter.com/eEGceWORid

He didn’t Run
He didn’t hit back
He didn’t abuse
He didn’t misbehave
He didn’t creat any scene
He didn’t take law in hand
But F I R Registered on Him.#ArrestLucknowGirl
and let boys live🙏 pic.twitter.com/96i82JW7Y8

Zaheer Khan, one of the most experienced bowler of Indian cricket team, celebrated his 41st birthday yesterday. Wishes from all over the internet poured...

An Instagram story uploaded by Kerala based cricketer Sanju Samson after the world cup squad announcement from BCCI is going viral among the online...