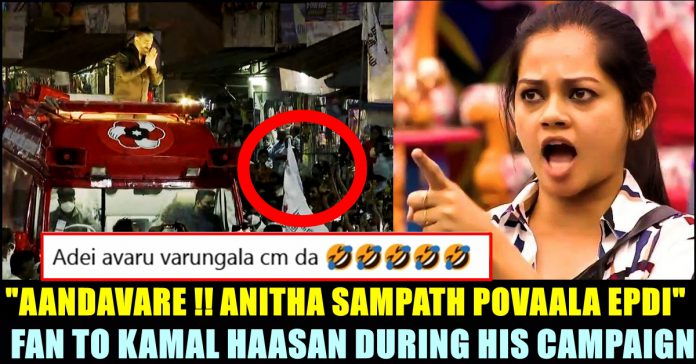 Bigg Boss is a show that is being widely watched by families in Tamil nadu. The show which identifies itself as a miniature of this entire world, connects with the family audience easily due to the problems and confrontations that are taking place between the contestants in daily basis. The reality game show functions based on the votes of the audience. A contestant who gets less number of votes from the audience would be evicted each week.

So far, the show has witnessed a number of controversies, confrontations, arguments, quarrels and some interesting physical tasks. Nine contestants including Archana Chandhoke, Aranthangi Nisha, Jithan Ramesh, Sanam Shetty, Samyuktha, Mirchi Suchi, Suresh Chakravarthy, Vel Murugan, Rekhagot evicted from the show. Kamal Haasan who is hosting the show in the weekend episodes, is busy campaigning for his political party “Makkal Needhi Miam” in the week days. He has been visiting the south part of the state to meet people and to gain votes in the upcoming election.

Now, a video of an ardent fan questioning Kamal Haasan about the eviction of Anitha Sampath while he was campaiging for his party is going viral in the social media platforms. The fan seems to be a resident in Nagercoil district which is evident through his slang. The voice could be heard “Aandavare Anitha Sampathu Povaala epdi” when Kamal was greeting the people by standing on his campaign van.

Reacting to this video, many people laughed their lungs out. Few of them answered the follower’s question as well. Check out some of the reactions below :

Kamal Haasan is currently hosting the fourth consecutive season of the show now. Last week, when a caller questioned Kamal why he is hosting a show like Bigg Boss, the “Virumandi” actor said that he feels connected with the family audience while hosting the show and also reiterated that more than 40 million people are watching it from their home. “I feel that people could able to witness the real self of me through this show unlike in films where they would only get a chance to witness the character I am playing” he said. He who started is party a named “Makkal Needhi Maiam”, a couple of years ago, is promoting it through the Bigg Boss in every possible way.

Previous articleThis Popular Vijay TV Star Wants Meera Mitun To Be Arrested !!
Next articleShakeela Won The Hearts Of Internet With This Gesture !! WATCH

Not even a single photograph of Saravanan released since his first of its kind eviction from Bigg Boss house. Unlike other eliminated contestants, Saravanan...

People Who Mocked Chadwick Boseman’s Looks Are Getting Thrashed !!

At the age of 43, Chadwick Boseman who is widely known as "Black Panther" died while fighting against colon cancer. The actor was struggling...

Director Atlee celebrates his 34th birthday on 21st of September with the blessings of his fans and fellow colleagues. Director Vignesh Shivan, Samantha Akkineni,...

Here’s What People Who Watched SARKAR Has To Say !! Check Out !!

Mersal released on Diwali 2017 and became a blockbuster even though it was embroiled in several controversies. In Tamil Nadu itself, the film had...