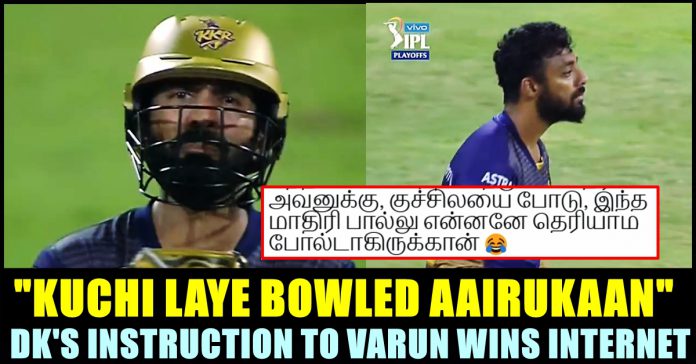 Ever since Varun Chakravarthy started representing Kolkata Knight Riders in Indian Premier League, cricket fans from Tamil nadu has been hearing some catchy phrases and one liners from Dinesh Karthik, former captain of the same team. He who has been keeping wickets for years, developed a habit of interacting with Varun in Tamil language. In the second qualifier where Kolkata faced Delhi Capitals, Karthik gave some valuable instructions to Varun and it grabbed the attention of the Internet platforms.

Instead of discussing with Varun ball to ball by walking through the pitch, Dinesh decided to go with this way of interacting with him directly. The stump mic which was kept to record the rattle of stumps for the Television audience, recorded Dinesh Karthik’s chatter too.

From instructing Varun on where to bowl the ball to criticizing him for bowling a bad delivery, everything was recorded only to make the Tamil audience go gaga over it. In the second qualifier, among the many instructions, Dinesh, during Varun’s fourth over, instructed him on how Delhi’s Shreyas Iyer batted earlier.

When the Delhi batter tried a reverse hit and failed, Dinesh could be heard saying “He is thinking of where you would bowl. Remember last time when he got out by exposing his stumps. Don’t get afraid” by mentioning stumps as “Kuchi” which means stick. “Avan unna paathu etho yosikraan . . Nyabagam vechiko last time Kuchi laye bowled aairukaan . . Intha maadhri pantha enna panrathu nu theriyaaama bowled aairukaan” Dinesh says. Watch the video below :

The interaction between the duo has been receiving huge reception from the Internet audience. “even actual North Indian KKR and DC fans would be wondering what Dinesh Karthik is shouting to Varun behind the stumps. they’d be like “kyaa yaar kya baath kar rahe wo?” a fan wrote as his tweet whereas another one said “Because of these convo, team will think twice to separate this duo. Varun is getting all the tips on ground openly and nobody could do anything about it.”

even actual North Indian KKR and DC fans would be wondering what Dinesh Karthik is shouting to Varun behind the stumps.

they’d be like “kyaa yaar kya baath kar rahe wo?”😂😂

Dinesh Karthik ~ Talk something in tamil for 5-10secs. 📢

Because of these convo, team will think twice to separate this duo. Varun is getting all the tips on ground openly and nobody could do anything about it.😂😂😂

“Eminem is the fastest rapper in the world”

Well they haven’t listened to Dinesh Kartik speaking in Tamil behind the stumps.

Dinesh Karthik is making even commentators talk in Tamil in English commentary! 😂😂#DCvsKKR

Bigg Boss Tamil season four is all set for the grand finale and the final week sees the old contestants who got evicted from...