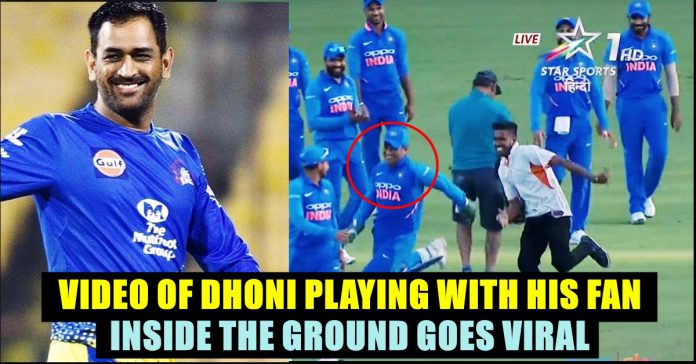 The year 2019 has seen Dhoni in extraordinary form, especially against Australia. Having bagged three back-to-back half-centuries in the ODI series during India’s tour Down Under, the former Ranchi-born wicket-keeper batsman bagged his fourth consecutive in the format against the Aussies in Hyderabad on Saturday. The tally of runs this year, sees him sit on a Don Bradman-esque average of 150.50. But unfortunately the cricketer today got out on the first ball duck.

We all know MS Dhoni has a crazy fan following all across the cricketing world. Dhoni is the player who has a massive fan following across the nation as well. Now in today’s match while Indian team players coming into the ground for the second innings a fan as usual trespassed into the field only to touch the legend. However this is not the first time something like this is happening. Be it playing for Chennai Super Kings or Indian team Dhoni faced this situation about a dozen of times.

A pitch invader chased MS Dhoni around the VCA Stadium in Nagpur before the start of the second innings of the second ODI between India and Australia. Now the cricketer exposed his most funniest face as he ran away from the fan and let him chase. Even captain Virat Kohli tried to stop the fan from chasing Dhoni but he did not seem to be stopping. Finally the veteran himself gave up and let the fan tough him where the emotional fan hugged his favourite cricketer.

Check out the reactions this video receiving :

Another day another devotee 😍
🙏🙏@msdhoni pic.twitter.com/ZmcM47jmze

Thala @msdhoni with a Devotee…#Dhoni

#INDvAUS
Dhoni at his best😂😂😂 pic.twitter.com/DX4cGr8vmc

Video: None can get hold of Dhoni, on the field or off the field. Call him elusive or lightning fast #Dhoni #INDvAUS @msdhoni

The ongoing Nagpur ODI is currently interestingly poised at the moment with Australia managing to skittle India out for 250 runs. Virat Kohli slammed his 40th majestic century and the focus was now on the second innings and how the hosts defend the score. The team ended up with their huddle as the Men in Blue strode out to the middle to start the second innings only to witness a hilarious incident with MS Dhoni at the centre stage.