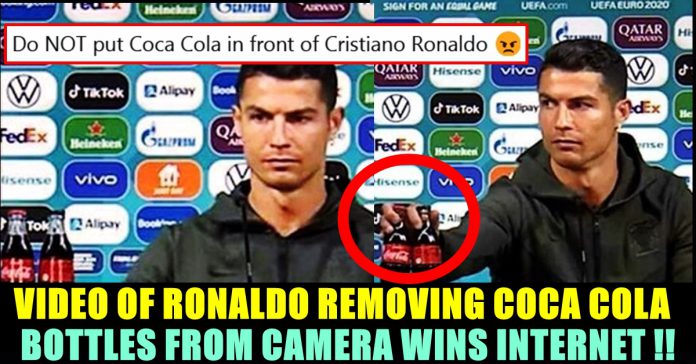 As we all know, the world famous football played Cristiano Ronaldo is a fitness freak and has inspired millions of people around the world to be fit. The 36 year old has been giving “goals” to people of his age to look younger like him. His young looks got acknowledged by several people including media, fans even his fellow footballers. Now, a gesture of the global icon at the Portugal’s press conference has grabbed the attention of the Internet users. He removed the Coca cola bottles which were placed in front of him and gestured public to “Drink Water” by showing a water bottle.

He appeared in the press conference with Coach Fernando Santos. After arriving to attend the press conference, Ronaldo who saw two Coca Cola bottles placed in front of him, removed them and placed it away so that it couldn’t get captured with him in camera. Further, the man who enjoys a huge fan base across the world, lifted a water bottle and suggested people to “Drink Water”. He literally said “Be with water” in Portuguese. His gesture surprised many including his coach who was sitting beside him.

Ronaldo often expressed his dislike over junk food and reveled about the advises he provided to his son who drinks Coca Cola, Fanta and eats crisps. It is worth notable that “Coca-Cola” is the official sponsor of Euro 2020. However, media channels have mentioned that UEFA might take actions against the star footballer for this gesture of him.

The video went insanely viral across the world with various kind of reactions. “Do NOT put Coca Cola in front of Cristiano Ronaldo” wrote a Twitter user whereas another one said “Coca Cola pays a lot of money for euro advertising, putting bottles next to players at a press conference, Ronaldo, seeing bottles of cola, put them aside, taking the water, thus encouraging people to drink healthy.” wrote a fan page of Ronaldo.

Coca Cola pays a lot of money for euro advertising, putting bottles next to players at a press conference, Ronaldo, seeing bottles of cola, put them aside, taking the water, thus encouraging people to drink healthy.

Do NOT put Coca Cola in front of Cristiano Ronaldo 😠

This is absolutely brilliant 🤣 pic.twitter.com/bw9FYlTOI4

Cristiano Ronaldo removed Coca-Cola bottles and Insisted everyone to drink water instead of Coca-Cola.

It’s great to see a role model like Ronaldo reject Coca Cola for water, setting a positive example for young fans and showing his disdain for a cynical marketing attempt to link him with a sugary drink.#AdEnough https://t.co/YXBLdLfKWe

Previous articleNetizens Trolled Vanathi Srinivasan After Noticing This Detail In The Opening Ceremony Of Her MLA Office !!
Next articleMadan OP Challenged Police Officials After Absconding ??