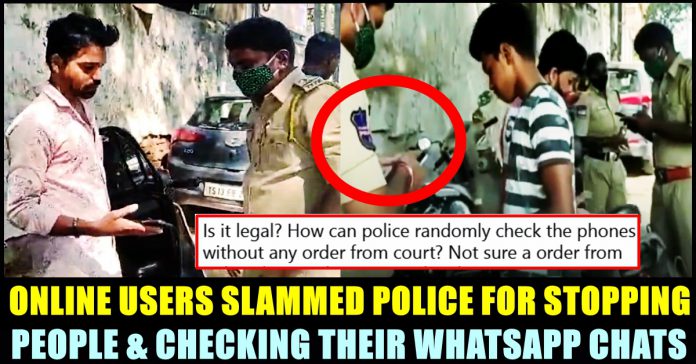 To prevent the consumption of illegal drugs such as “Ganja”, police officers of Hyderabad decided to scroll through the personal chats of public by searching for keywords in the chatting apps of their cell phone. Cops sent a message to media saying “Hyderabad city police will not take rest until Ganja is completely eliminated from Hyderabad” after booking a number of ganja cases in the city. In the process, on the instructions of the commissioner of Police, every police station has been instructed to carry out raids and searches to nab people who are involved in peddling or consuming the illegal drug in Hyderabad.

As a part of the search, Police are also stopping people who look suspicious and searching their cell phone chats by keying in words like “Ganja” in the search box in order to find any related chats. One such video of police stopping people and searching their cell phone surfaced in Internet with many users of online platforms expressing their displeasure over it.

Gajarao Bhupal, Deputy commissioner of Police, South Zone, said that he is aware of cops checking the cell phones of public. “We are not forcing anybody to give us their cell phone nor snatching their phones away to check. People are cooperating and no one is complaining. So I don’t think there is anything illegal” he said according to The News Minute. When he was asked whether public have any option to deny, the police officer, reportedly said “The public can deny giving their phone. However, we will then have to see what legal provisions apply. So far we have not faced any such issue. There are no specific instructions as we there has not been any issue so far”

New policing practices alert: stop and search phone chats by the @hydcitypolice. Police are searching phone chats for words like ganja. Wait until they replace words with NRC, Modi or BJP. pic.twitter.com/1lNjvKRIgk

Along with activists, many users of social media has been calling out the activity of police officers. They believe that such search on people’s personal chats is not only illegal but also unconstitutional. “Me and Brother was going towards Mangalhatt And same Happened with me ! Policemen asked to open Whatsapp and searched keywords and surprisingly some of the groups were having those words they interrogated on road and after finding nothing they asked to leave! I was shocked!!” a social media user said while seeing the video with many terming the act as “illegal”.

This is illegal and tantamount to a general warrant @hydcitypolice.

Under what law can you ?
1. Stop pedestrians without reasonable suspicion
2. Conduct a general search on their personal effects
3. Temporarily seize personal messaging devices https://t.co/cLrqNRl1gd

Is it legal? How can police randomly check the phones without any order from court? Not sure a order from police dept to their team is legal.

Me and Brother was going towards Mangalhatt And same Happened with me ! Policemen asked to open Whatsapp and searched keywords and surprisingly some of the groups were having those words they interrogated on road and after finding nothing they asked to leave! I was shocked!!

Happened once in #Bengaluru as well. It was 11.30 pm. @BlrCityPolice asked to show the images in the phone, they were looking for some pics of narcotic substance. When refused, they blackmailed that they’ll take my friend to police station and take some drug tests

What nonsense. Every beat Constable knows who local dealers are and whereabouts of local weed smoking Addas in parks, playgrounds, etc.

warrant has long died and has been forgotten.

Slowly and slowly your liberties will be snatched and you will become habitual of such things.

Remember, no one blinks an eye now after listening to that useless Covid caller tune before every call!

Soon it will be replaced with govt propaganda advertisements. https://t.co/07zgdMNaST

You can't make a city "Ganja-free" by searching chats. This is just harrasment. https://t.co/4FGRCKodBL

"Ganja fuka kya" is common lingo in Hyderabad if someone makes exaggerated claims. Should city people avoid using it?