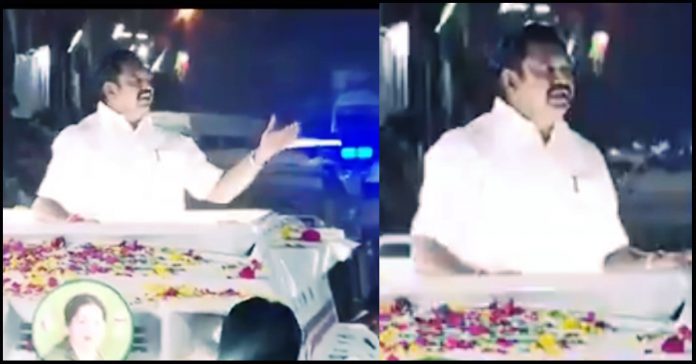 A video of Chief minister Edappadi K Pazhaniswamy advising people not to hurt a cow which interrupted the campaign is trending in the social media platforms. The video shows Chief minister Edappadi K Pazhaniswamy suggesting people that a cow won’t cause harm. The way he handled the situation made people who were present there to cheer for him in a loud manner.

Chief minister Edappadi K Pazhaniswamy is actively participating in the campaigns across the state ahead of the assembly election. During his campaign at the Kaattumannarkoil of Cuddalore, a cow intruded the crowd. The joint co-ordinator of AIADMK who saw his followers shooing away the cow, asked them to do it without hurting the domestic animal.

“Make way for her to go. Don’t hurt . . She will leave if she finds a way. Cows won’t cause harm. Don’t hurt her . . We farmers are treating cows as our God. She came this way by mistake” Chief minister Edappadi K Pazhaniswamy said amidst the loud cheer of public people.

During his campaign speech at Kallakurichi, EPS said that corruption emerged in the state since Karunanithi became the chief minister of it. “That is the reason MK Stalin is constantly using the word “corruption” against Tamil nadu government. He couldn’t forget the word” said Cheif minister Edappadi K Pazhaniswamy during his speech.

Previous articleHere’s What Whatsapp & Instagram Has To Say After The Global Outage !!
Next article“Kaalan Biryani At Rs. 2 For College Students” – Woman Made SM Users To Shed Tears