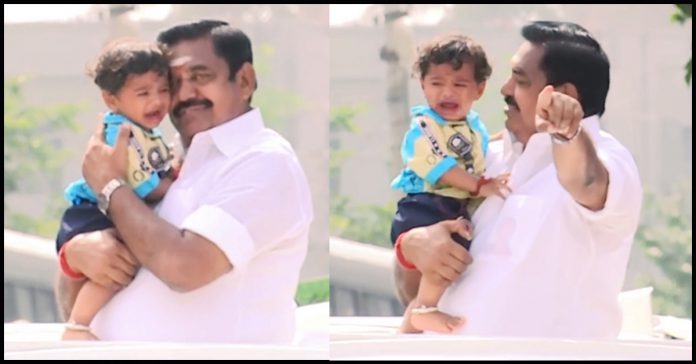 Tamil nadu chief minister and co-coordinator of AI ADMK Edappadi K Pazhaniswamy is busy campaigning for his political party across the state for the upcoming assembly election. Days after the reports on a mother and child who boarded on the same flight of chief minister Edappadi Pazhaniswamy got deplaned due to the continuous weeping of the baby surfaced, now a video of the chief minister pacifying a crying baby during his election campaign in Coimbatore is doing rounds in the social media platforms.

As a part of two days election campaign in Coimbatore, Chief minister Edappadi K Pazhaniswamy has been addressing the people of the district. He promised to build concrete houses to the farmers and farming labourers during his campaign and said that the state government will make more announcements in the coming months, which will benefit all section of people.

“The announcements to be made at the time of elections will be delightful and the government will deliver on all its announcements” Edappadi K Pazhaniswamy assured. “The AI ADMK ground will form the government for the third consecutive time” he asserted in front of the crowd.

Thousands of people are attending the campaigns being conducted by the Chief minister. “Impressive turnout.” said political analyst Sumanth Raman on seeing the number of people who attended the campaign of Chief minister Edappadi K Pazhaniswamy in the Periya nayakkam palayam of Coimbatore district.

Meanwhile, a video of Chief minister Edappadi K Pazhaniswamy pacifying a child who was crying continuously in the crowd is doing rounds in the social media platforms. In the video, we could see the chief minister trying to stop the weeping of the child by showing him the camera.

He also embraces him with a smile and gives a warm hug before handing him back to his parents. The video is doing rounds in social media platforms with songs such as “Aanantha Yaazhai”, “Kannana Kanne” in the background.