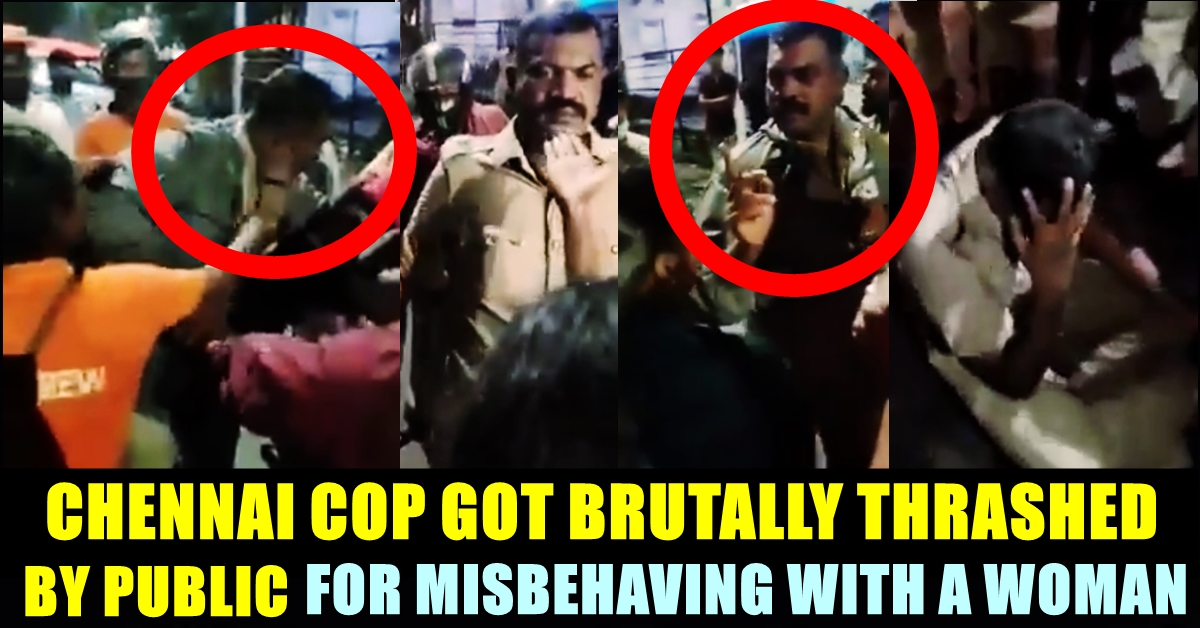 A three days old video of police constable named Rajiv getting thrashed by public for misbehaving with woman goes viral now. He got arrested on Monday after misbehaving with a woman in Vadapalani while wearing his Police uniform. He who resides in Arumbakkam, was working for KK Nagar police station, but posted at the MGR Nagar police station on OD basis, according to a senior police officer.

On Sunday, around 10 PM, while returning from work to his home, he reportedly stopped his vehicle at the bus stop near Ambika Empire Hotel on 100 feet road and asked a woman who is aged between 20-29 to come with him, according to the Police. It was reported that the cop had grabbed the woman’s hand when she refused to go with him.

He also tried to misbehave with her. A woman who was standing nearby entered the scene to support the victim whereas the public gathered. The people also could be seen scolding the police for his cheap behaviour. The women in the crowd used their sandals to beat the cop as well.

The other woman too began beating him up and asked him to prostrate before the first woman. Initially they questioned him for his behaviour. . After knowing that he behaved that way under the influence of alcohol, they started beating him up, irrespective of his uniform. A woman in the crowd also demanded him to fall on the feet of the girl and apologize. One of those in the crowd, recorded the whole incident and uploaded it in social media platforms. Videos of him being thrashed by public is doing rounds in social media with various kind of captions.

“He was released on bail as he suffered injuries due to the severe beating. He will be suspended and departmental action will be initiated against him for consuming alcohol during duty” the officer reportedly said. Watch the video below :

Last week, the madras high court taking suo motu cognisance of a similar video which went viral wherein a constable in Tenkasi is seen misbehaving with a woman in public, had suggested a creation of a special wing so that offences reported on social media platforms and other media outlets are brought to the notice of the authorities without waiting for a fromal complaint.

Celebrities Can’t Keep Calm After Seeing This Announcement Of Vijay’s Next !!
Kumaran Released A Video Shedding Tears For Chithra !!