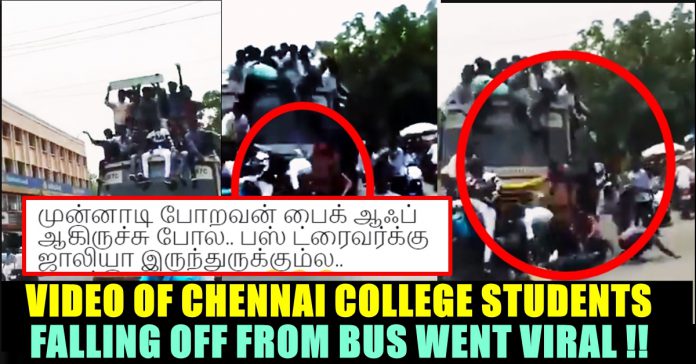 Recent video of students who were travelling on top of a government bus falling off like playing cards goes viral in Internet with hilarious captions and reactions. Going by the reports, the students who travelled on top of the bus belong to Pachaiyappa’s college and they travelled inappropriately to celebrate the Bus day. The video which caught on camera made the Netizens laugh their heart out as students were seen raising slogans and dancing on the roof of the moving bus. The students were seen hanging from the window bars and footboards of the moving bus. They climbed on the roof and created nuisance by blocking the traffic to take a group picture in front of the bus.

When the one who was moving in bike in front of the bus stopped unexpectedly, maybe due to engine’s fault, the bus driver forced to push the sudden break which caused the accident. However it seems no serious injuries to any of the students as they walked off the scene calmly as if nothing happened after falling off.

Check out some of the reactions this video causing in Twitter :

Most of them are contract killers, rowdies and politicians in the making!

I seriously dono whether to laugh loud for this instant meme or feel for these kids , but yes this is an offence …

They need to be educated.

I laughed at this 😃. Then I said myself that I shouldn’t be laughing at such things. I watched the video again and laughed out loud this time 😂😂 #Chennai #Busday

Hats off to the driver. Not only professors even a good driver teach a good practical lesson. I appreciate the driver #mtcdriver #BusDay #mtc

Despite repeated warnings from the police that they are not supposed to celebrate, students took out the procession. The police have identified and detained a few students in connection with the incident.

Netizens Slammed Sivaangi For Humiliating Madurai Muthu !! Check Her Reply To Them

A number of online users came up with posts condemning Sivaangi of "Cooku with Comali" for an incident that took place in one of...

In an unexpected turn of events, a 50 year old man identified as Deepak allegedly shared his own mother's nude pictures and blackmailed her...