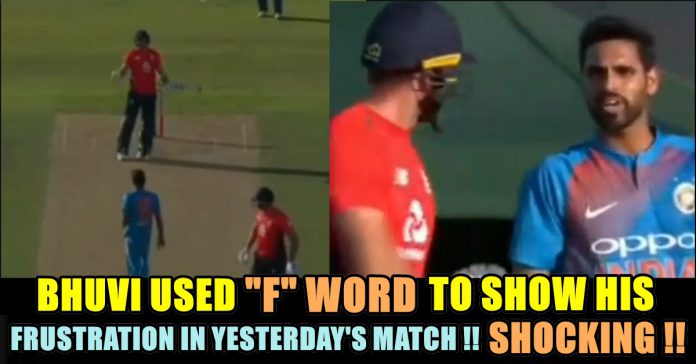 The much-awaited contest between India and England got underway at the Old Trafford in Manchester on Tuesday. The visitors thumped the Eoin Morgan-led side comfortably to take the lead in the three-match T20I series. The duo of Kuldeep Yadav and K L Rahul floored the hosts and looked baffled in front of their home crowd. Probably they were not expecting India to come so hard at them which led to some heating arguments between David Willey and Bhuvneshwar Kumar on the field. The game was in the balance halfway through the first innings when England were batting thanks to Jos Buttler. But the 14th over witnessed a dramatic shift in momentum as Kuldeep Yadav sent back the likes of Eoin Morgan, Jonny Bairstow and Joe Root in the space of 4 deliveries. Despite Buttler scoring easily at the other end, his partners found it difficult and they could only post a total of 159 runs after 20 overs. Bhuvneshwar Kumar was going through a rare off day on the field and had already conceded 37 runs off his three overs. He was handed over the responsibility to bowl the last over by his captain and had done a fairly decent job as well. It was all about finishing well as he got into his strides to deliver the final ball of the innings. But David Willey pulled out at the last moment when he was about to leave the ball from his hands. The umpire called it as a dead ball but the bowler was left frustrated with the last minute pulling off of the batsman. He straightaway expressed his disappointment to Willey and there was a heated argument between the two. It is very rare that Bhuvi loses his cool and it was evident in Manchester last night. Thankfully, they didn’t cross the line and Bhuvi delivered a proper delivery then which was taken for a couple of runs to end England’s innings on 159. Watch the video below :

The score proved to be below par with KL Rahul smacking the leather hard. He also brought up his second century in T20 Internationals and celebrated his comeback to the Indian team.
Previous articleActor Siddharth Slammed “Tata Sky” In Public For Poor Service !! Fans Joined Him & Brutally Trolled Tata Sky !!
Next articleForget Dhruv !! Will “Varma” Match Shalini Pandey’s Performance In “Arjun Reddy” ??

RJ Balaji Got Criticized For Not Knowing How To Drive A Car In Shooting Spot !! Check How He Handled The Situation

RJ Balaji who started his career as a radio jockey, is currently busy acting in movies for Kollywood film industry. He who also gets...

“Pure Hatred Against One Man” – Theatre Owner On Govt. Allowing 100 % Occupancy In Theatres

From Monday onwards, movie theatres from across the country will be allowed to have 100 % occupancy, announced government as a part of the...