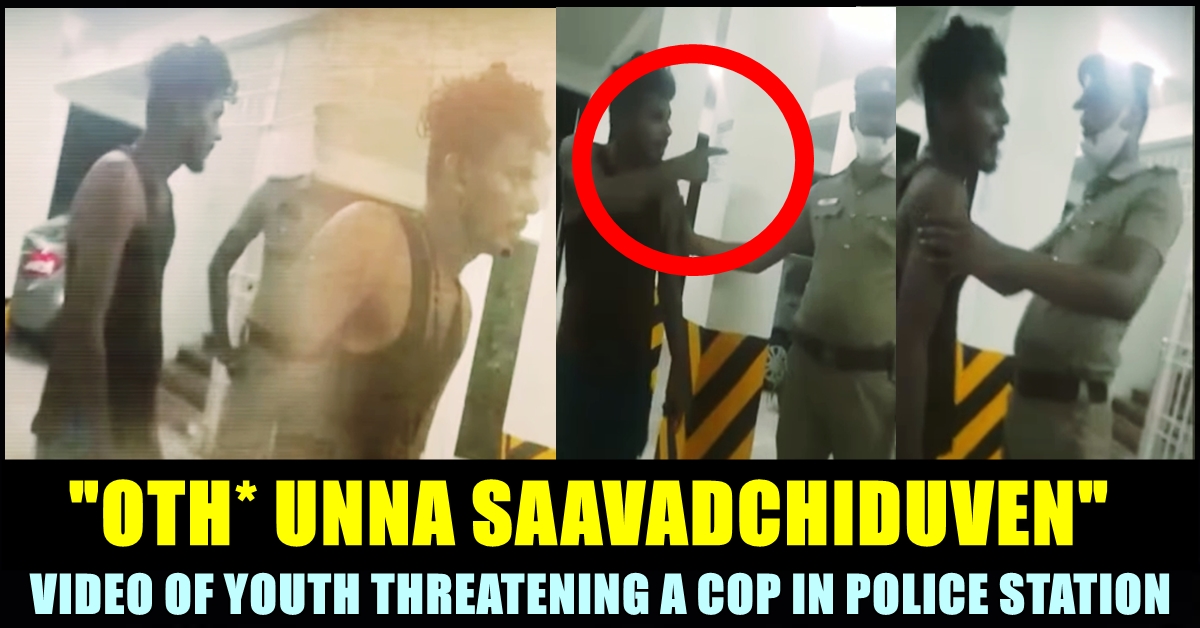 Video of a youth threatening a police officer named Sathish and inviting him for a wrist fight is going viral in social media platforms. Identified as Karthick aka “Pichai” Karthick, the youth seems to be a serial offender as reports suggests that there are four assault cases are pending against him. Holding a blade-like sharp object in his hand, the accused threatens the police officer to slit his throat if he ever walks on street to do his duty. The incident took place at the Abhiramapuram Police station that is located in Chennai.

Sathish Kumar is an Armed reserve constable and the suspect was in an inebriated state when the incident happened around 10 30 PM on Sunday. The video which is doing rounds, shows the suspect disrespecting the cop in front of other cops whom he refers as his “brothers”. Reports suggested that a search is on to nab the cinema-style rowdy but netiznes question how could he managed to escape the station involving in such act.

“Be careful, you can’t able to step out of you confront me” the suspect could be heard saying in the viral video. “I will kill you before you step out of the gate” he abuses the cop. “I will slit your throat, right here. You want to pick a fight ? Remove your uniform and come. Don’t behave like you are the God. Act like a constable, if you are one” he threatens the cop and refuses to leave the place despite of the several warnings of other cops.

He goes on to refer other police men as his brothers. “All of them are like by brothers. I am also treating you as my brother” he says. It has been reported that Police stayed calm to prevent him from doing something dangerous as he had blade in his hand. “If you ever come into the street to do your job, I will definitely cut you into pieces” he says in the face of Sathish. The video is doing rounds in social media platforms with people demanding highest punishment for the accused.

Reports suggests that this is not the first time Karthi trespassed Police station. Police said that he entered the old police station by scaling the compound wall at night and ate the food kept by Police personnel. Check out some of the reactions surfaced in Internet regarding the viral video :

Moeen Ali Couldn’t Forget About “Valimai Update” Incident Even During His Retirement !! WATCH
This Star Player Of Indian Team Complained About Kohli’s Captaincy ??