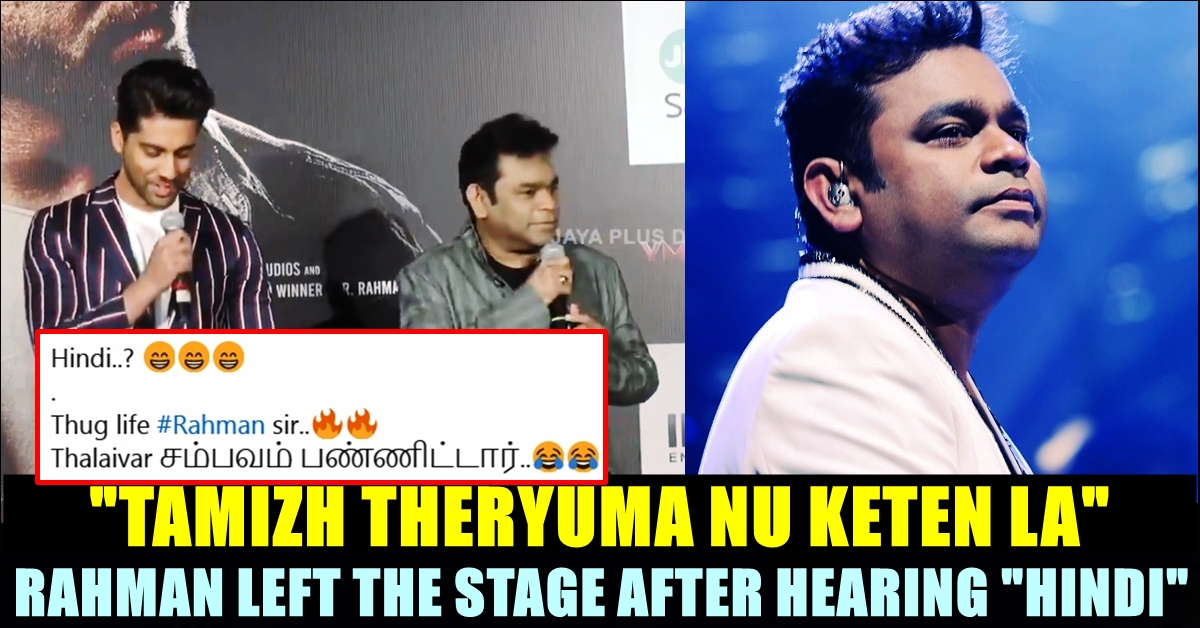 On the birth anniversary of the Oscar winner, A video of A.R Rahman leaving the stage after expressing his shock over the anchor using Hindi language to welcome the protagonist of his debut production “99 songs” is trending in Internet with various kind of reactions. The musician exclaimed “Hindi” after seeing the anchor welcoming Ehan Bhat in Hindi and left the stage immediately asking “I asked you whether you know Tamil or not, ain’t I ??’

Oscar winning A.R Rahman turned a story writer and producer through “99 songs”, a film which was directed by a debutant named Vishwesh Krishnamoorthy. The film marked the feature film debut of Ehan Bhat as a hero. The ensemble cast of the musical drama includes Edilsy, Tenzin Dalha, Lisa Ray, Manisha Koirala, Rahul Ram, and Ranjit Barot. Ahead of the film’s release, A.R Rahman conducted an event having the top musicians of Tamil film industry as chief guests along with some of the stars. The event took place at Chennai.

Sivakarthikeyan, S.J Suriya, Anirudh, Yuvan Shankar Raja, G.V Prakash are some of the celebrities who took part in the event. “The film is inspired by the real-life stories and experiences of other musicians. I think the credibility for music and music as a profession is still not there. We have entertainingly touched upon several layers.” said A. R Rahman while talking about the film.

Followed by Rahman’s answer, the anchor who is a female welcomed Bhat by speaking in Hindi. Rahman who was taken aback, exclaimed “Hindi” immediately and started leaving the stage. When crowd in the hall roared, Rahman asked “I have asked you whether you know Tamil or not, ain’t I ?”

“Sir, I have been talking in Tamil sir, just welcomed him, sorry sir” she heard replying. The video is doing rounds in social media platforms with reactions opposing Hindi opposition.

He is scared to use hindi to avoid censure from rabids….thats a sad state of affairs that even rahman is not safe from linguistic chauvinism https://t.co/c5kl5tAATC

“He Looks Smarter Than Me In Every Way” – Sivakarthikeyan On Seeing This Debut Hero
Gayathri Raguramm Slammed Dindigul Leoni For His Speech About Women !! WATCH
Advertisement