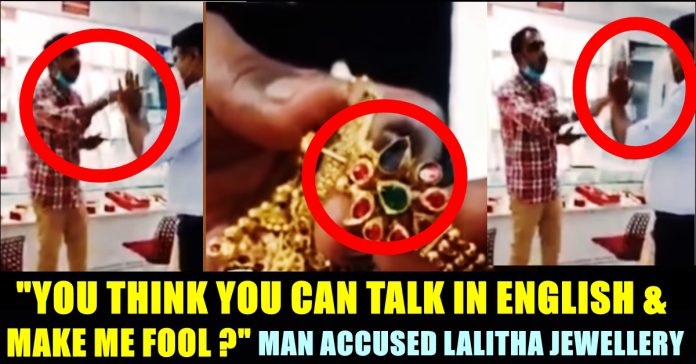 A video of a man accusing Lalitha Jewellery of cheating with the gold he bought in one of their stores years ago is doing rounds in social media platforms for the past one week. In the video we could see him arguing with an employee of Lalitha jewelleries in their own store, accusing the firm of cheated him by adding worthless metal in a gold he bought.

When the employee claims that it is a pure 916 hallmark gold and there will be some wax beneath, the customer questions whether they are using half gram wax for each stone of gold. The customer who reached to the store with his wife and child, further says that it is not wax at all but some kind of worthless metal. When the employee of Lalitha tries to get the bill from him, the customer denied to hand it over to him and says that he could give him a photo copy of it if he wants to see anything in it. He keeps insisting the employee to remove the stone from his jewel.

“We are investing our hard earned money here. For what ?? To get cheated like this ?” the customer questions who bought the Jewel on 14th of October 2018 for his wife who was pregnant at that time. “We were planning to buy diamond and later settled with these gold instead. Can you remember ? You have texted me in Whatsapp and suggested various kind of diamonds” he says to another employee of Lalitha jewellery.

“I can prove you that there is no gold beneath this paste. No stone in this jewel consists gold. There are only metals in it.” he says and wants the Lalitha jewellery employee to remove the stone and show. “Let’s remove and see how much gold, paste and metal it contains” he could be seen saying in the video.

“In a 7 pounds of gold, there are 3 pounds of metal.” says the customer and demands a justification. When the employee requests him to be seated, the agitated customer says “I am also educated but I am not a fool to become a fool in front of everyone like this. I have invested all my hard earned money here. I am still paying interest for that. You think you can talk to me in English and make me fool ?”

Later, wife of the customer reveals that they couldn’t get money with the gold during an emergency as it consists worthless metals. Though the improvement of the complaint made by the customer is not known, the video is doing rounds in social media platforms with reactions of public supporting him. Popular youtuber Arunodhayan who is enjoying 4 lakh plus subscribers in the video posting platform, uploaded a video stretching his supportive hand to the customer.

Previous articleHere’s How This Family Won Free Pizza For 60 Long Years !!
Next articleYouth Lost Rs. 16 Lakh To Two Girls While Chatting With Them In A Dating App !!

Netizens Came Up With “Kurumpadam” For Dhanalakshmi Before Kamal Haasan!!

Users of online platforms who watch Bigg Boss show came up with a "Kurumpadam" for Dhanalakshmi who had a confrontation with G. P Muthu....