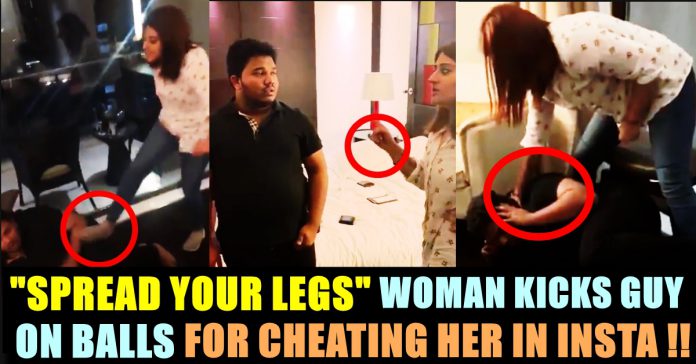 The three video shows a guy getting beaten up by a young woman repeatedly. The woman who communicates with him in English and Malayalam reportedly got cheated by him through Instagram. The woman literally beating him black and blue and also abusing him verbally for cheating her. The video was shared by one of a Facebook user who posted with a caption saying “Meet the gold digger girl.  This guy created Instagram page and told this girl that he is very rich. But when they meet up he said he has no money. 😂😂😂 she broke her arrange marriage because this guy said he is very rich.” This guy created fake Instagram
Id to con this girl for money and wanted to flirt with her modesty. pic.twitter.com/hw8cfSlYiT

These videos suggests that the guy who created a fake Instagram account cheated the girl by saying that he own luxurious house. In one of the video, the woman heard saying that she cancelled her marriage which was an arranged one only because of she trusted this guy.

The girl who got irked once she came to realize the truth gathered her friends to thrash him. These video goes viral in Internet and created massive outrage. Check out some of the reactions from the people who witnessed these videos :

The guy may or may not be guilty. Time will tell. But why isn’t this horrible person in jail ? She wanted to kick him in the groin. This is disgusting on so many levels. Cc @DeepikaBhardwaj

Not sure about matter but beating anyone like animals is not at all a choice.our law allows it?
Reverse gender n u would HV heard voices f women activist
Is this #WomenEmpowement?#NoLaws4Men #MenToo@SwatiJaiHind @smritiirani @aajtak @ZeeNews @UNHumanRights @PMOIndia @HMOIndia

What exactly happened?
Why is she beating him?
And how big a crime is done by the guy that he is not defending himself?

Looks like the guy is guilty or outnumbered. The female a gold digger who realised her mistake.

Although she is a gold digger, the guy also lied to his best… Moral.. Both made for each other 🤣🤣🤣

However no police investigation has been made so far on the matter it seems. Let us wait to see what law has to do !!

Previous articleJUST IN : Santhosh Shivan Accidentally Revealed About A Single Shot Sequence In The Movie !! Check !!
Next articleAbhirami Wants To Talk With Mugen’s Girlfriend After Coming Out Of BB?? Watch Video !!

Director Alphonse Puthren of "Premam" fame is busy replying to the critics of his recently released film "Gold" starring Prithviraj and Nayanathara. The filmmaker,...

BIG STATEMENT : Ravi Ashwin Wants His Team Batsmen To Play Like This One CSK Batsman !! : Check Out Who !!

After suffering a 10-wicket defeat against Royal Challengers Bangalore, Kings XI Punjab skipper Ravichandran Ashwin reckons that the team has a problem in the...