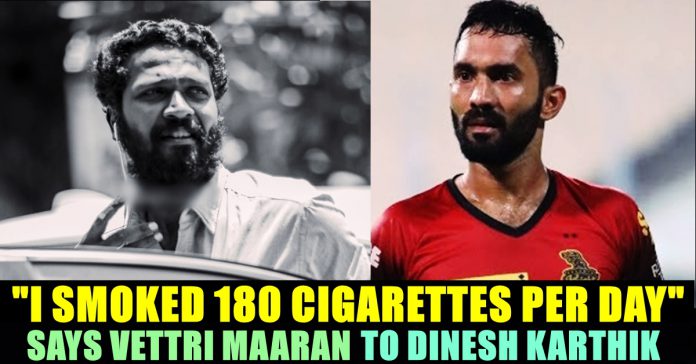 National award winning Director Vettri Maaran interviewed by world cup winning player Dinesh Karthik and his fitness trainer Basu Shankar. The 55 minutes long video which is streaming in Film Companion South youtube channel, helps us to know about the insights of Cinema, Vettri Maaran’s cinema, to be precise. Both Vettri Maaran and Dinesh Karthick are training under Basu Shankar to keep themselves fit. The filmmaker answered to many of the questions shot by the Karthik and Shankar in a genuine way.

Being one of the most talented directors of Tamil film industry, Vetri Maaran’s most recent venture Asuran became a massive blockbuster. Vetri directed Danush four times in his career so far in his filmmaking career which spans more than 10 years. He won national award for his film “Aadukalam” under best director category. His film Visaaranai also won national award for best feature film in Tamil. Visaranai is India’s official entry to Oscar but failed to get nomination. The filmmaker is going to direct Danush in the sequel of Vada Chennai which marks his fifth directorial in Tamil cinema.

Now, in this interaction, Vettri shared many things regarding his personal and professional life. It is notable that Vettri, in a series he wrote for Ananda Vikatan with a title “Miles to go”, revealed that he smoked almost 170 cigarettes per day during his earlier days. Now, in this interaction, while answering to one of a question of Dinesh Karthik, Vetri revealed how he became a non smoker after watching “Vaaranam Aayiram” movie.

Dinesh Karthik asked Vetri Maaran to elaborate on the journey of being a massive smoker to becoming a non-smoker. “From what I have heard, you used to smoke quite a lot and now you are completely a non-smoker. How does it helps you professionally. Elaborate a bit on that situation” asked Dinesh Karthik to Vetri maaran.

Answering to Dinesh, Vetri said that started smoking since he was 13 years old. “From my 13 to 33, I have smoked. Towards the end of Polladhavan times, I used to smoke 170,180 cigarettes a day. I never kept a count. But my boys would alert me saying that I have finished 15 or 16 cigarette packets. At that time, it used to be 10 cigarettes a pack. I would asked them to buy two more packets for stock. I used to lit a cigarette before starting to eat, so that I don’t have to waste time on lighting up a cigarette after finishing my food” the filmmaker said on how addictive he is to smoke.

Vetri Maaran went to explain how he left smoking after getting signals from his body. “If you are smoking for a 20 long years, your body will start telling you that it can’t take it anymore. If we start listening to the body, we will start working towards it” said the filmmaker. Despite of his doctor’s advice, Vetri Maaran kept smoking. Vetri Maaran made a decision on quitting smoking once his angio results came. Though the result was normal, Vetri Maaran says that he thought of quitting smoke only at that point.

The filmmaker said that he went to Basu seeking his help to quit smoking by concentrating on fitness. However, Vetri says that Gautham Menon’s “Varanam Aayiram” is the film which made him to quit smoking. “The film deals with smoking and all. I think that film helped me in one way to strongly decide not to smoke. After watching the film, I smoked one last cigarette and never smoked until then. It was in 2008 I guess.”said Vetri who wants everyone to find their own way of quitting smoke. The filmmaker further went on to add how addictive nicotine is and how easy it is to access it. He also said fitness is one of main attribute for a filmmaker to lead 200, 300 people in his shooting sets.

Apart from this, the trio discussed on many things including Vetri Maaran’s favourite movies and favourite books. Vetri also said how he sees the victory of “Parasite” in Oscars and why Indian films couldn’t get a nomination in Oscars. Watch the full interview of the filmmaker and comment your views !!