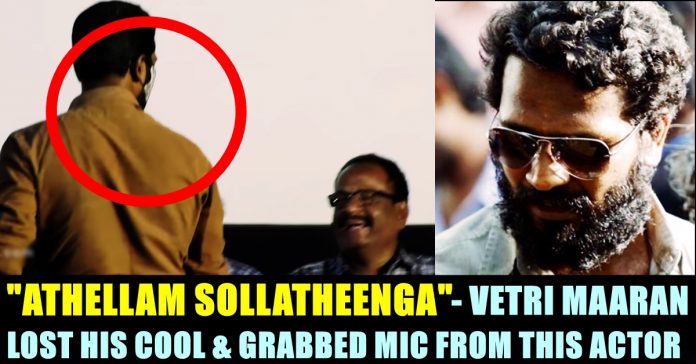 Press meet of Samuthrakani starring “Sanga Thalaivan” took place on Wednesday and the event included the participation of ace filmmaker Vetri Maaran along with the filmmakers. Directed by Mani maaran, the film has Samuthrakani, Karunas in the lead roles. Vetri Maaran, one of the producers of the film, during his speech, said that he decided to produce the film and release it in theatres on his own for the first time.

“It is a big challenge to take a particular portion from a novel in order to make a script out of it. Karunas and Udhaya wanted to produce the film and I joined them. We felt that it would be nice if Samuthrakani plays the lead role. He came forward and everyone did their part sincerely to complete the film” Vetri Maaran said during his speech.

“We are trying to release the film directly on theatres for the first time. I could feel the release tensions now. We are aiming for theatrical release amidst the OTT culture only because of our passion towards the theatres. Dhanu sir is helping us in releasing the film in theatres as we don’t know much about it. I thank him for leading us” the filmmaker added.

He also thanked each and everyone who are associated with the project. After his speech, reporters questioned the writer of “Sangathalaivan” movie. Bayilwan Ranganaathan, popular press reporter who is known for asking controversial questions, demanded several answers from the writer based on the film. Writer Bharathi Nathan answered to him and many other reporters in a polite way.

Regarding the ending of the film, a reporter asked how a murder could act as a solution for another murder. Answering to him, the writer referred to an incident that took place in Keezhvenmani where a Gopalakrishna Naidu killed 44 working people and went free. “Communists are the one who gave him the appropriate punishment” said the writer.

Actor G. Marimuthu who is known for his role in “Pariyerum Perumaal”, got the mic from the writer and said that it is just a cinematic form. “Beyond everything, it is just a cinema. Cinematic form of a fictional story” said G. Marimuthu and got interrupted by directed Vetri maaran. The filmmaker stopped him and said “Athellam Sollatheenga . . Athellaam Sollatheenga” while grabbing the mic from him.

This proves that Vetri Maaran doesn’t want cinema to be treated as a mere entertainment medium. He who made films such as “Asuran”, Vada Chennai”, “Aadukalam”, “Visaranai” takes his business seriously and doesn’t like anyone demeaning it for any purpose.

On the work font, the filmmaker is busy making a film by having actor Soori in the lead role. The film also has actor Vijay Sethupathi in an important role. After that, he is planning to direct “Vaadi Vaasal” with actor Suriya. The filmmaker, in an earlier interaction with Vikatan channel, said that he going to wait for actor Vijay after finishing “Vaadi Vaasal”.