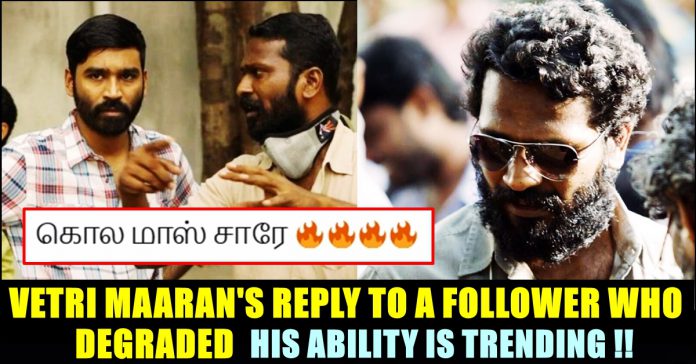 Director Vettri Maaran who is considered as one of the most progressive filmmakers of our era, is known for his sensible public statements and for the stand he takes in public issues as well. A reply he made in the year 2011 to a fan who tried to degrade his personal skills, is trending in the micro blogging social media platform now. The 44 year old filmmaker is currently busy planning for his next projects with actors Suriya and Soori.

On 23rd of July, Vettri released a character poster of actor Suriya in his upcoming film “Vaadi Vaasal”, in a way of wishing the actor, a happy birthday. The filmmaker who is not very much active in social media platforms, logged in Twitter to release the poster.

Check out the exclusive posted released by Vettri Maaran below :

The film which is going to be produced by Kalaipuli S Dhaanu, will be based on acclaimed Tamil writer C.S Chellapa’s novel of the same name. This is the third time Vettri Maaran is going for a novel adaptation in his filmmaking career. Earlier, the he made Visaaranai based on Chandra kumar’s “Lock up” novel and “Asuran” based on Poomani’s “Vekkai”. Both the films gained him critical acclaim and “Visaaranai” went on to clinch national award for best feature film. The success of “Asuran” proved Vettri as a commercial filmmaker as well.

Now, an old reply tweet of the filmmaker, through which he made one of a twitter user to shut is trending in Twitter today. In the 5 movies Vettri Maaran made so far, 4 of them were with actor Dhanush who gave him an opportunity in the year 2007 through “Polladhavan”. They both had a bonding since legendary filmmaker Balu Mahendra’s 2005 film “Adhu Oru Kanakaalam”. In the film Dhanush worked as a protagonist and Vettri Maaran, as an assistant director. After Polladhavan, the duo went on to make “Aadukalam”, “Vada chennai” and “Asuran”. All the three films massively impressed audience and they have already planned for the sequel of Vada chennai.

In the year of Aadukalam’s release, the Twitter used who deleted his tweet now, is widely believed to have made an ill statement on Vettri Maaran’s ability of becoming a filmmaker without Dhanush’s help. Replying to him, Vettri said that Dhanush identified him but he didn’t give what he has, indirectly mentioning the filmmaking knowledge and skills. He asked online user to think twice before saying this.

“Mr. Tamilvanan Dhanush identified Vetri Maaran but he didn’t give Vetri Maaran what he has. Think twice before saying things” read the reply of the filmmaker.

@tamilvanan101 Mr. Tamilvanan Dhanush identified Vetri Maaran but he didn't give Vetri Maaran what he has. Think twice before saying things

Many people in twitter started reacting to the tweet supporting Vetri’s befitting reply at that time. Check out some of them below :

Comment your views on this reply of Vettri and the reactions !!

Ahead of the Tamil nadu assembly election, Political party leaders and members are busy campaigning for their respective parties. Alliances between different political parties...

In a first of it's kind incident that took place in Omalur, Salem, a college studying girl student got arrested under POCSO act for...

After losing a thrilling IPL 2019 Eliminator to Delhi Capitals, Sunrisers Hyderabad captain Kane Williamson rued the team's inability to close out games through...