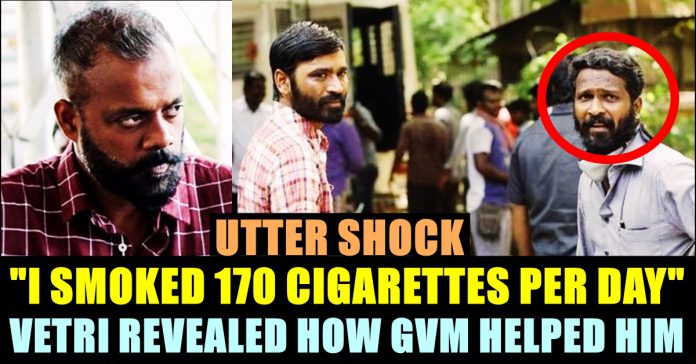 Being one of the most talented directors of Tamil film industry, Vetri Maaran is now busy in directing Danush for his next venture Asuran which is based on the novel Vekkai by Poomani. Vetri directed Danush three times in his career. He is also going to direct Danush in the sequel of Vada Chennai which marks his fifth directorial in Tamil cinema.

Vetri Maaran joined Loyola College, Chennai in 1994, to study English Literature. He continued his studies there till 1999 after which he dropped out of his master’s degree to pursue a career in the film industry. After that he joined ace director Balu Mahendra as assistant and worked so hard to become a successful filmmaker in Tamil industry.

Now in a series he wrote for Ananda Vikatan which was titled as “Miles to Go”, Vetri Maran elaborated on how he suffered with the habit of smoking. The director says that he started smoking from 13 years. “Friends from my school time to Cinema industry, all would imagine me with a cigarette in hand when they hear my name” says the director.

“The body parts would not grow as it supposed to do, if a human being starts smoking before 21. They say Nicotine is more addictive than brown sugar but Nicotine is the one which we can easily access in our society. I consumed from 5 to 170 cigarettes per day during the days of Polladhavan” he said.

“After the release of Polladhavan, I took E.C.G test and realized that my health is not normal comparing to my fittest friends who are non-smokers. I stopped smoking cigarette to become fit like my friends but it lasted only a month. During one day, I found it difficult to continue my script work and asked my assistant Ravi to buy me a cigarette packet. He who knows that I quitted smoking bought it with hesitation. I smoked 10 cigarettes on a row on that day and my body required that much of Nicotine” says Vetri Maaran.

After so much attempts, the director says that it was a Tamil movie that made him quit smoking forever. “Me and my wife Aarthi went to watch Vaaranam Aayiram movie. The way the habit of smoking handled in the movie did something to me. After coming out of theatre I told myself to smoke one last cigarette and till now I haven’t consumed another one” says Vetri Maaran who also lauds Gautham Menon as a filmmaker. “I consider this as his biggest victory as a Filmmaker” he added. After that Vetri took oath not to keep a smoking scene for protagonists in his movie and he is indeed standing by his words so far.

We often don’t consider the important role our lungs play in keeping us strong and well. It’s not until we experience problems breathing that we take notice. But the truth is, like the rest of our body, our lungs need daily care and attention.

Filmmaker Slammed Netflix For The Contents They Are Making In India !!

Independent filmmaker Leena Manimekalai who recently released her film "Maadathy" at an OTT platform named Neestream in pay per view method, came up with...

Aesha Opens Up About Divorcing With Shikhar Dhawan!!

Aesha Mukherjee, wife of Indian cricketer Shikhar Dhawan has announced their divorce. She has posted an emotional note on Instagram with this regard. Aesha Mukherjee...